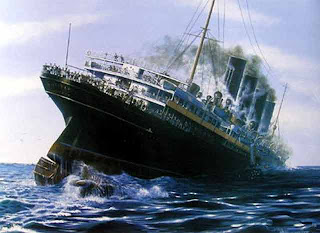 I sometimes wonder which is the more powerful – myth or history. Actually, no, I don’t: I know that myths have a power that defies history, defies any attempt at sober analysis. I recently took part in an online discussion of the general denseness of contestants on American game shows. The point was made that they could not answer relatively simple questions, a question like the sinking of what ship led to U.S. entry into the First World War.

I knew at once that we were in the arena of myth simply by the way in which the question had been framed, in the singular - the sinking of what ship. I’ve come across it before, in British game shows, where the same misleading question was posed and the same wrong answer given. In the discussion thread my initial point was that while Americans may be slow it does not generally take them almost two years to make up their minds!

So, no more of this; let’s get to the point; let me sink that ship that might just be floating in your head. The RMS Lusitania, yes, that’s the one, was sunk in May 1915. America did not enter the war until April 1917, as a result of not one but multiple sinkings. The Lusitania incident may have begun a shift in American opinion against Germany, but there is no direct connection between its torpedoing off the coast of Ireland and Woodrow Wilson’s decision to ask Congress to approve a declaration of war in the spring of 1917.

You may thing the point is overly subtle, but it’s not. The Lusitania might be said to occupy the same place in popular consciousness as the USS Maine, who’s sinking in Havana harbour led to the Spanish-American War of 1898. But if you are going to Remember the Lusitania remember that it was sunk in the first phase of Germany’s unrestricted U-boat campaign, under which all ships entering British territorial waters were held to be legitimate targets. This was subsequently abandoned in the light of adverse American reaction.

Now move two years forward, or a few months forward from the presidential election of November 1916, when Woodrow Wilson campaigned for re-election on a slogan of “He kept us out of the war”, not “Remember the Lusitania.” The chance of America entering the conflict on behalf of the Allies was not especially high, so long as Germany restricted its submarine campaign.

It’s now early 1917. There had been a major change in Germany’s domestic politics. In place of civilian government a kind of military dictatorship had been established, directed by the duumvirate of Paul von Hindenburg and Erich Ludendorff. Under pressure from them, and contrary to the advice of the Chancellor, the Kaiser agreed to a second unrestricted U-boat campaign.

It was the First World War’s Pearl Harbor moment: all parties knew that unleashing the wolf packs in the Atlantic would cause American entry into the war. For Hindenburg and Ludendorff it was a calculated gamble. They understood, quite rightly, that it would take up to a year for the United States to mobilise properly, by which time, with the Allies starved of supplies, the stalemate on the Western Front might be broken. They believed, quite wrongly, that the U-boat campaign would be enough.

So, the sinking began afresh, of ship after ship, vessels whose names, unlike the Lusitania, are now forgotten; but it was the many not the one that caused Wilson to deliver his War Message to Congress on that April evening in 1917.
Posted by Anastasia F-B at 16:30