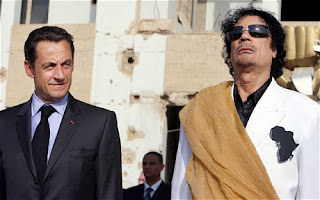 As I write French mirage jets are patrolling the skies over Libya. In Paris President Sarkozy is talking tough, standing on his high-heeled shoes;

In Libya, a civilian population which is passive which requires nothing further than the right to choose itself its destiny finds itself in danger of life. We have a duty to respond to its angst-ridden call.

The future of Libya belongs to the Libyans. We do not want to take a decision on their behalf. The fight that they are undergoing is their's. If we intervene on the side of Arab nations, it is not to impose on the Libyan people, but to apply to a universal conscience that cannot tolerate such crimes.

Yes, Sarkozy, the conscience of humanity, has heard that ‘angst ridden call,’ though less from the Libyan rebels and much more from the French people, increasingly perplexed by the bewildering turns in their foreign policy, by the sheer incompetence of their ‘angst-ridden’ president. He has an election next year, you see, and the Libyan situation is just so convenient, giving the Little Man the chance to pretend he is a Big Man, Napoleon IV, cutting a fine figure on the world stage. There he is, grandstanding in Paris while his bombs fall on the people of Libya.

Forgive me if I express just a soupcon of cynicism over Super Mouse and his moveable conscience, one that allowed France to sell the selfsame weapons to the Mad Colonel that were used against those expressing that ‘angst-ridden’ call. I think it must have been another man, possibly a doppelganger, who received the Colonel in Paris in December 2007, telling the press that he was not perceived as a dictator in the Arab world. It was this fraudster, one not sensitive to ‘angst ridden’ calls or the ‘universal conscience,’ who proceeded to sell the Libyans fighter jets worth billions of Euros.

Let’s be frank: French intervention in Libya has nothing to do with humanity and everything to do with prestige, at least the prestige of the country’s beleaguered and ridiculous president, one who is happy to do deals with dictators when it suits and turn on them when it does not, all for the greater glory the Sarkozy.

As French jets now fly in the name of humanity the time might have come to ask Monsieur le Président some awkward questions about Laurent Gbagbo, about a prior commitment to the people of the Ivory Coast. Is there something wrong, I ask, is their ‘angst ridden call’ not quite as loud as that from Libya?
Posted by Anastasia F-B at 17:03