I come to praise Caesar 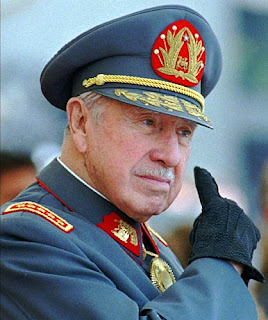 I wrote the following polemic last year for another, multi-author site. I’m reviving it here because the subject was alluded to in another discussion elsewhere. Enjoy. :-)

It’s a dangerous thing to put one’s head in the lion’s mouth. Still, I enjoy danger, I enjoy taking risks. I’ve hinted before that I might write in praise of Augusto Pinochet, the late dictator of Chile, the saviour of his country and a friend of my own. So, yes, I come to praise Caesar, not to bury him. I come to pull him from under a mountain of dead dogs, heaped upon him by the left in the process of damnatio memoriae.

First, let me say a word or two on the political and historical context. The Cold War, as Niall Ferguson says in The War of the World, was anything but cold; no, it was a prolonged struggle between the communist and the free world in which a series of conflicts by proxy were fought out, all the way from Korea to Nicaragua.

It was a war that threw up some real horrors, as wars do, none worse than Pol Pot, none more genocidal than the Khmer Rouge. It was a struggle, moreover, that the West looked at points as if it might lose, especially in the period leading up to the end of the war in Vietnam, a period which saw the advance of communist and communist supported regimes across a good part of the world. It was a war that saw all sorts of dirty tricks being used, as counter-attack followed hard upon attack. It was against this background that the Marxist Salvador Allende came to power in Chile, backed by a communist-left alliance.

Yes, bad things happen in wars and it’s simply inconceivable for Richard Nixon not to have worked towards the downfall of this regime, given the Cuban example, and given the poor strategic situation across the world. Even so, it’s quite wrong to see the 1973 coup as no more than a CIA-inspired operation. No, the incompetent Allende brought his downfall upon himself. In his brief period of power he had effectively wrecked the Chilean economy. It is a terrible thing to destroy a democracy, of that I have no doubt, but Allende’s democracy was effectively destroying itself. If Pinochet was an evil he was a necessary evil.

The military coup of 1973 was certainly violent, perhaps more violent than strictly necessary. Still, it was considerably less violent than the murderous revolution in Cuba. Pinochet killed his thousands, certainly, but Castro his tens of thousands. I simply do not understand those on the left, alert to human rights abuses in one place, blind to them in another.

I certainly don’t deny that the general came as a surgeon, but after some drastic procedures Chile started a miraculous and sustained recovery. Pinochet’s free market reforms made the country the most dynamic economy in Latin America, a position it retains today. It’s also as well to remember that, once the economic problems had been addressed, it was Pinochet who restored Chilean democracy on a stable and lasting foundation. Contrast that with Cuba where dictatorship deepened as the economy was ruined; contrast that with Venezuela, where a Castro clone is in the process of destroying a naturally rich economy while he increases his personal power.

And, of course, if it had not been for Pinochet, if it had not been for the vital support that he extended during the 1982 Falklands’ conflict our task there would have been all the more difficult. Sadly he was demonised by the liberals and the left; disgracefully he was placed under arrest and held against his will during a visit to this country, a shabby and vindictive return for past favours.