Hell is other people 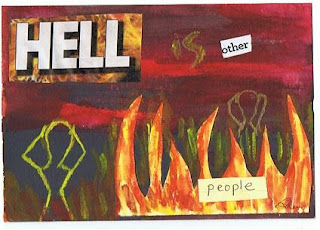 I have a generally poor opinion of Jean Paul Sartre, the doyen of post-war French intellectual life, a poor opinion of his politics, his philosophy and his style as a writer, prolix and tedious in the extreme. Being and Nothingness, his magnum opus, is in my estimation the greatest of the gas giants on the horizon of European thought. I also despise him as a man, vain, shallow, self-absorbed, cavorting in his Parisian café cocoon, embracing, when he was alive, one repellent left-wing cause after another in the name of ‘proletarian authenticity.’

There is one exception, one brilliant piece of work of his that I admire hugely. It’s his existential play Huis Clos, most often translated into English as No Exit. It’s the best piece of ‘closet’ theatre that I have ever seen, one of intense and uncomfortable emotions, sparse and uncompromising. If acted well, with maturity and conviction, the themes can cut deep.

The premise is straightforward: three people, two women and a man, have died and gone to hell. They find themselves in a room alone together, which they assume is the antechamber for the tortures to come, the tortures ‘promised’ by Catholic theology and medieval imagination. The room has no windows and only one door. The lights never go out and there is no sleep; they can’t even blink anymore, can’t escape in any way

There they are, Joseph Garcin, the man, along with Inèz Serrano and Estelle Rigault. Concerns about themselves, concerns about what is to come, leads to mutual explorations. Bit by bit they each realise why they are there, what aspects of their conduct led to this. Confessions become weapons, ways of probing and attacking each other.

Worst still, they are totally incompatible as individuals, totally at variance with each other: Garcin, the self-obsessed and callous coward; Serrano, the malevolent and manipulative lesbian; and Rigault, the shallow and thoughtless socialite. All three have used and abused other people while alive.

As the verbal torture continues Garcin has a moment of epiphany. He demands that the door opens; it does. All three are afraid to leave, afraid of what is beyond. What is beyond? Nothing, there is nothing; there is only this room and those three forever and forever. The hell of gothic imagination does not exist; this room is hell; these people are the demons, doomed to torture one another endlessly, dissecting each other with words sharper than weapons. Hell, as Garcin shouts out, is other people.

Now imagine yourself in eternity, eyes never closing, sleep never coming, in the same confined space with two other people, people with whom you would be at total variance. There is no way out, no escape, no exit: this is eternity. You might then think that traditional notions of hell were a blessed comfort. :-)