The Masque of Anarchy 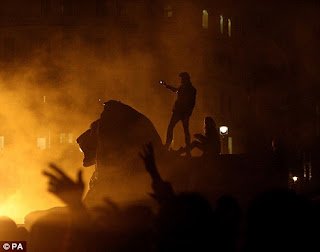 Decent people did well to keep out of central London on Saturday as a ghastly mob exercised their right to ‘peaceful protest’ against the present government’s cuts (cuts; what cuts?). How much more convenient it would have been if they had marched across the English Channel, the waters helpfully parted by God. How much we would have benefited if, half way across, God had allowed the waters to close again, in a moment of ennui or perhaps exercising His own peaceful right to peace.

Just think how much this country would have saved if these tax eaters, dole recipients, holders of worthless public sector jobs (Assistant Deputy Chief Liaison Officer to the Disabled Black Lesbian Caucus); student nurses, ready to learn how to abuse the elderly in lethally dirty National Health Hospitals; teachers who teach nothing in state schools to pupils too stupid to learn anything; recipients of third rate degrees from fourth rate universities, the work-shy ‘workers’, ignorant and worthless people of all sorts, had disappeared for ever. Oh, I can always dream.

No, instead they exercised their right to ‘peaceful protest’ bringing violence and chaos to the streets of our capital, summoned there by the Trade Unions Council; summoned by the likes of Red Len McClusky, a lover of Cuba, Communism and Castro (what; no peaceful right to protest?), so repellent to look at with his thick nose and his heavy features that he would win any ugly man competition nem con. 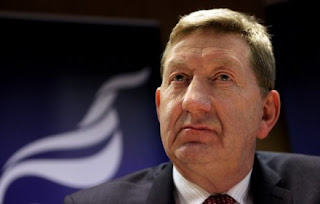 Once this mob had gathered it was given the support of the Labour Party in the person of Ed Miliband, the leader of the opposition, a former member of a government, a criminally incompetent government, responsible for the financial morass this country is in at present. Oh, yes, however he may wish to distance himself from the thugs who rampaged along the city streets, sub-human orcs (sorry, I couldn’t resist that!) who relish destruction for the sake of destruction, his very presence was a spur, an indication of the true worth of his loathsome party. This rampage was planned months in advance, as a casual glance at Twitter and Facebook would have shown. Only an idiot would have failed to realise that a riot was in the offing. Oops, sorry, I’ve clearly given Ed a way out. 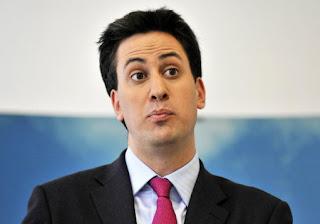 Only an idiot and the Metropolitan Police, apparently, who in their handling of the mayhem appeared more Keystone than ever, even more than they did in last year’s march against the increase in tuition fees. What the hell is going on? How much more pathetic can London’s police force become, not the ordinary officers, who had light bulbs filled with ammonia thrown at them, but the command, senior officers so anxious to be goody goody that that they invited civil liberties activists to monitor their softly softly approach. How are these idiots going to cope with the forthcoming royal wedding, another anarchist target?

On Saturday they probably took heed of Ugly Red Len’s admonition to keep their hands off “our kids”. I expect they planned a nice party with the anarchists, all sitting down and singing Kumbaya. What a pity it is that heads were not broken instead, what a pity that the ‘accidental’ mayhem was beamed across the world as ‘their kids’ behaved like the apes and troglodytes they are, what an impression others will have of England. How sorry I feel for the poor benighted tourists caught up in the sickening madness.

Last came Anarchy; he rode
On a white horse, splashed with blood;
He was pale even to the lips,
Like Death in the Apocalypse.
Posted by Anastasia F-B at 15:15