The Eagle has fallen 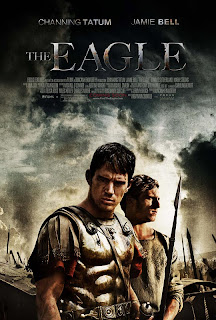 I read Rosemary’s Sutcliffe’s The Eagle of the Ninth when I was in my early teens. It’s a bit of a boy’s own historical yarn, though not without some female interest, based on the legend of the Roman Ninth Legion, which supposedly vanished from history into the bogs and myths of first-century Caledonia, that terra incognita in Britain beyond Hadrian’s Wall and civilization. I loved it, a gripping story, well-written, well-plotted and well-told.

Now I’ve seen The Eagle, a movie directed by Kevin Macdonald based on the book, sort of based on the book, since there are some serious departures, including all of the female interest. I understand that the name change was to stop potential American audiences assuming it was a movie about golf!

Did I enjoy it? Well, yes, on one level I did: the cinematography is superb; Scotland has never looked more beguiling, beautiful, mysterious and eerie on film, all at one and the same time. But overall the movie was stolid rather than solid; plodding, literal-minded, poorly acted, and not very inspiring. It’s also quite derivative. I was reminded of movies as diverse as Apocalypse Now, Rob Roy, Brokeback Mountain (yes, Brokeback Mountain!) and, above all, The Last of the Mohicans. The Caledonian tribe called the Seal People even looked like the Huron Indians.

It’s also a road movie with no roads. Marcus Aquila, a completely wooden performance by Channing Tatum, is a man with a mission: he needs to recover the honour of his family and Rome by recovering the golden eagle standard, lost some twenty years before when his father led the Ninth into an unknown fate in the north. Invalided out of the army after a clash with some barbarians, he sets out north with Esca (Jamie Bell), a British slave gifted to him by his uncle (Donald Sutherland).

Esca had previously been saved from death in a gladiatorial show by the intervention of Marcus, with whom he forms a bond based on honour and obligation, not liking and trust. No, Esca, does not like the Romans; Esca would far rather the Romans went home! Road movie, yes, and now buddy movie, of a sort, with the tension between the two becoming the core of the unfolding drama. This might have worked and worked well but there is no real chemistry between the two characters, between the sleep-walking Tatum and the unremittingly surly Bell.

On their journey Marcus and Esca come across one Guern, played by Mark Strong, an English actor who affects a bogus American accent. You see, all of the Romans here are Americans, which is clearly intended to give the audience a not terribly subtle message about the evolution of imperialism. So, there you have it: now you know that Guern is a Roman, one of a band of survivors of the Ninth who have made a home from themselves in this wasteland. It’s on his intelligence that Marcus finds out that the standard lost in battle is with the Seal People, the most dreaded of the local tribes.

Enter the Hurons. Actually, on further reflection, I was reminded more of a band of sinister and overgrown smurfs, given that the warriors of the Seal People have taken to painting themselves in shades of dirty blue. So, on the trek goes and the Sea People encountered, Esca helpfully being able to speak their language, Gaelic, incidentally, which did not appear in these parts for another four hundred years. No matter; some poetic licence has to be allowed, as nobody now knows the language of the people who lived in the north of Caledonia, the people the Romans referred to as the Picts, the painted ones. Gaelic serves as a reasonable substitute.

I’m beginning to tire as I write because this is turning into one big spoiler. You’ve doubtless guessed the rest; yes, the Eagle is recovered and a dash made for the Wall, punctuated by a confusing battle between the old boys of the Ninth gathered together by Guern, looking ever so much like a band of beat-up hell’s angels or hairy roadies, and the Seal people – I simply could not work out who was doing what to whom.

By the end I really didn’t care that much that Marcus with Esca, now a free man, in tow was able to bring the Eagle to Rome to the delight and surprise of a group of Ameri…sorry, Roman senators. There he was, quest complete, walking off Brokeback-style with Esca into a Roman sunset (well, I did say there were no girls!).