The man who never quit 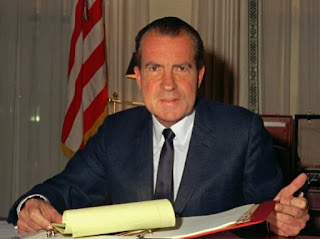 I recently said in discussion that Richard Nixon was a great and troubled man whose story could only have been written by Shakespeare. I am certainly no Shakespeare, so you need not expect The Tragedy of King Richard I any time soon! But I admire Nixon as a man and as a politician, along with Ronald Reagan the most outstanding president, in my estimation, of the post-war years.

Are you surprised? How can anyone admire Tricky Dickey, Watergate man, the only president to be forced out of office under threat of impeachment? It can’t be denied there is a lot to deplore in aspects of his career, something of the night, something of Caesare Borgia in a character which often verged on the unscrupulous. In the end, as he himself admitted, he let his country down. Still, he was a man of outstanding intellect and ability, a man of vision and imagination, a man courageous enough to make the bold moves, the moves that make history; a man who rose and fell and rose again, time after time.

Who would have believed that Nixon, who made an early reputation as a red baiter, would be the president to normalise relations with Mao’s China? Because of this he now stands in the same pantheon as Don Giovanni and Falstaff, the only chief executive ever to have inspired an opera!

There is indeed something of the Shakespearean prototype about him - a tragic hero, flawed as all such figures are, flawed in such a way that brought about his own downfall. Consider, though, what he achieved in the area of foreign policy alone, not just opening relations with China but at the same time managing a balancing act with the Soviet Union, which included an important strategic arms limitation treaty, the first major thaw in the Cold War.

He brought American involvement in the war in South-East Asia to an end, though it was to lead to the extinction of the Republic of Vietnam two years later, something he said would not have happened if he had remained in office. It was certainly through his prompt action that Israel was able to recover from its early reverses in the 1973 Yom Kippur War.

There is also much in his domestic programme to admire, the way in which he was able to bring America back from the economic and social chaos of the latter part of the Johnson presidency, the closest, perhaps, the country came to tearing itself apart since the early 1860s. In the end it was all for nothing; all for Watergate, that stupid, unnecessary burglary, followed by an even more stupid and inept cover-up that saw the Nixon presidency die by slow and humiliating degrees.

Yes, it would need someone with the talent of Shakespeare to capture the full irony of Nixon’s fate, but Oliver Stone made a credible attempt in Nixon, the 1995 biopic starring Anthony Hopkins. Here we see the man, a life beset with uncertainty and paranoia, with feelings of rejection, but always, always that drive that was to take him from a log cabin, well, a California grocery store, to the Whitehouse. The climb was hard, the fall harder – “To be outdone by a third rate burglary is a fate of biblical proportions.” It is indeed.

What followed was the presidency reduced to its nadir, through the Ford and Carter years, only recovering with the election of Ronald Reagan in 1980. By this time Nixon had also made his own recovery, showing, even in retirement, that he had lost none of the drive that had taken him so far in life. As a writer and elder statesman he was to gain many new admirers. His television interview with David Frost, the subject of Frost Nixon, a wholly engrossing movie, became the most watched encounter of its kind in broadcast history.

Iago, Hamlet, Macbeth – Nixon managed to combine elements of all three in his own complex and flawed personality. “A man is not finished when he is defeated. He is finished when he quits”, he once said. Nixon never quit. Is there any better accolade, any better obituary?
Posted by Anastasia F-B at 15:31