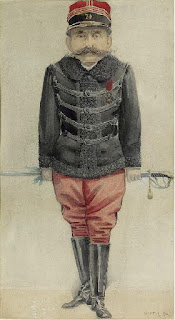 I thought that the facts in the case of Captain Alfred Dreyfus had long been settled. Here was an innocent man sent to Devil’s Island on a false accusation of treason. The real culprit, almost a pantomime villain, was Major Ferdinand Esterhazy. The whole sordid affair was then complicated by the division between the progressive and reactionary elements in French society; between those determined to prove the innocence of Dreyfus and those determined to preserve the honour of France and the French army, regardless of the facts, regardless of the treason.

A recent article by Nigel Jones in History Today (A Tale of Two Scandals) caused me to look at the old details in a new light. The scandal that followed the trial and conviction seems to have completely obscured the fact that their never was any treason; that the military information, really low grade stuff, that was to be passed to the Germans was part of a deliberate operation by the Statistical Section, the French intelligence service. Most important of all, Esterhazy was part of the sting, a plant no guiltier of treason than Dreyfus.

It gets murkier. The Germans were deliberately fed fake information or fluff, to use the jargon favoured in espionage circles, to distract them from the real secret, the development of the new 75mm light field gun. It was Esterhazy who came with the promise of secrets that were not secrets, playing a part allotted to him in an evolving drama.

To ensure that the Germans took the bait, there was one definite way of increasing Esterhazy’s credibility as a spy: offer a sacrificial goat. That was easy enough: there was Dreyfus, the unpopular Jewish officer attached to the Statistical Section, thoroughly disliked by Colonel Jean Sandherr, the anti-Semitic chief. He was also given a role: he was destined to be the greatest patsy in history.

What then follows, the whole political earthquake that shook France in the years leading up to the First World War, with aftershocks so far as Vichy in the Second, was in part shaped by issues of national security as well as prestige. For the army and sections of the intelligence service Dreyfus’ guilt had to be maintained, no matter what. Esterhazy, accused of being the real traitor by the opposition, had to be defended, no matter what.

Reactionaries on one side, liberals on the other, that was the other preconception I harboured about the whole affair. But again matters are not so simple; for the anti-Dreyfus camp contained none other than Oscar Wilde, the great dramatist living as an émigré on the Continent after his disgrace and imprisonment in England. In 1898, while living in Paris, he formed an unlikely friendship with the disreputable Esterhazy, who he referred to as ‘the Commandant’, listening sympathetically to his rants against Dreyfus in particular and Jews in general.

It’s an odd episode which, as Jones says, is omitted by most of Wilde’s biographers. One would have expected to find the Irish dramatist and political progressive, author of The Soul of Man under Socialism, to be on the side of Dreyfus, not just because of this but because he, too, knew what it was like to be an outcast, consigned to a brutal penal regime, one which ruined his health. But he took to Esterhazy, even though he was personally convinced of his guilt, simply because he had a fascination with life’s underside, with a decadent amorality. To put this another way: Esterhazy was the Dark Picture, not the light Dorian Grey.

There is an even deeper irony. When Emile Zola, the author and a leading pro-Dreyfusard, learned that Wilde was in receipt of confidential information from Esterhazy, revealing that he had acted under orders, he asked for details of the confession. Wilde refused, not just to protect his new friend, but because Zola, the greatest of the French progressives, notorious for a series of uncompromisingly naturalist novels, dismissed in England as the ‘apostle of the gutter’, was a homophobe!

Wilde now had an opportunity for some return against a man who had once conspicuously refused to sign a petition calling for clemency after his own conviction. Not only did he refuse to reveal any details of his conversations with Esterhazy, which might have lead to Dreyfus’ early release, but he dismissed him with characteristic flourish as a “writer of immoral romances.”