The face of Clegg forever 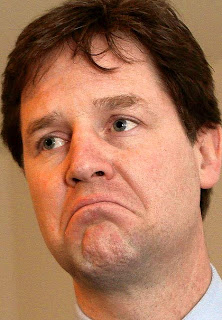 At the beginning of last month I wrote about our forthcoming referendum on the Alternative Vote (Rotten Alternative). To recap quickly, it’s about changing our present first past the post, constituency based, electoral system in favour of something ‘fairer’, something that supposedly will give an equal weight to all voters and, by happy chance, a greater weight to some parties, most notably the insufferable Liberal Democrats, the party that brought us the European ‘ideal’…and Nick Clegg.

I’m drawn back to the subject by a recent article in the Spectator by Andrew Roberts, one of my favourite contemporary historians, who always manages to speak with a fresh and stimulating voice on whatever subject he chooses to tackle, latterly the Second World War. The article contains some interesting points on Winston Churchill’s views of AV and the mediocrity such a system of voting would induce.

I’ll come on to this in a moment, but first a word about the celebrities who have been corralled into the yes campaign. Celebrity endorsements are virtually guaranteed to put me off a product, but just look at the slebs in Camp Clegg. They include Eddie Izzard, an insufferable prat who passes as a comic. It gets worse; the yes men also include Jonathan Ross, the biggest oik in British broadcasting, bad dresser, worse accent, who enjoys making abusive phone calls to old men. Izzard and Toss, sorry, Ross, is there any better reason for voting no?

Probably not, but there is Sir Winston’s view to add to the mix. As Roberts says, he described AV as ‘the child of folly’ which would become the ‘parent of fraud’, that it was the worst of all possible plans, the ‘stupidest, the least scientific and the most unreal of all voting systems’. It would mean that our elections would be determined ‘by the most worthless votes given to the most worthless candidates.’

Most serious of all, Churchill was of the view that such a system of voting would lower the prestige of Parliament and the parliamentary process and, as Roberts points out, he was speaking at a time when respect for our parliamentary system was far higher than it is now, still languishing in the doldrums of the expenses scandal.

Look how pathetic Nick Clegg is, look how he crumbles under pressure, this bland and hopeless man. Look, then, at the future of British politics, with him and his successors forever the kingmakers, the Limp Dumbs in command no matter the popular vote, in the same way that the Free Democrats were so long in command in Germany. The will of the people will no longer matter, just the will of the politicians and the parties, the third placed most of all.

Nobody I know cares much about this vote. At best some express a watery opinion in favour of ‘fairness’. The British are a fair-minded people who will generally go for the ‘fair’ solution. It worries me that we are sleep-walking as a nation onto this Clegg-de-sac, worries me that we will adopt AV on a low turnout, with most people not having the first clue as to what they are voting for. Well, what they are voting for is mediocrity, no quick decisions but unseemly horse-trading, no strong government but an apostolic succession of coalitions, yea, to the very crack of doom. It’s politics without politics; it’s mediocrity in command; it’s the face of Clegg forever.
Posted by Anastasia F-B at 15:29