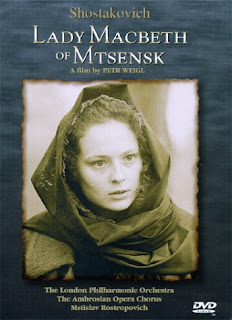 I spent the Christmas of 2005 with some friends in Moscow, an experience I’ve written about previously (Ana in Moscow). I’m returning to the subject because I’ve found the programme for Lady Macbeth of Mtsensk, the opera by Dmitry Shostakovich based on the story by Nikolai Leskov. We saw it on Christmas Eve, performed by the Bolshoi Company, though sadly not in the big theatre, which was under repair at the time, although the little theatre is splendid enough. My theatre was not Bolshoi but Menshoi!

I’m so glad to have found these notes which I thought I had lost. There they were, tucked away among various papers and old magazines, the notes of the twenty-seventh performance since it first opened in Moscow in 1935. It was a tremendous production of a brilliantly innovative piece of work, throbbing, vital and impassioned; expressionism at its purest.

Ever since 1934, when it premiered in Leningrad, now Saint Petersburg, it had been thrilling audiences in Russia and beyond. It marked Shostakovich, who was only twenty-six when he completed the score, as one of the authentic artistic geniuses of the whole Soviet period. Unfortunately for him genius, in the sense of free expression of natural talent, was about to die.

There was one person that the opera did not thrill – Stalin. On the night of 26 January 1936 he came to the Bolshoi with his entourage, comfortably placed in the government box. The composer, who had intended to travel to Archangel on the White Sea for a performance of his First Piano Concerto, received a call from Yakov Leontyev, the director of the Bolshoi, with the news. According to an account later set down by Mikhail Bulgakov, the novelist, Shostakovich rushed to the theatre “white with fear.” He had reason to be fearful; for the dictator, lackeys in tow, ostentatiously walked out before the final act.

Two days later an unsigned editorial appeared in Pravda under the title Muddle Instead of Music. Crude, vulgar and spluttering in its incoherence, the authorship has been in question ever since, though the polemical style suggests that it was penned by Stalin himself, or ghosted under his close direction. Whatever the source, it came in the form of a ‘directive’, that is to say that it was the opinion of the Communist Party itself, something beyond question. Sorry, it could be questioned, assuming one had a penchant for suicide.

“The music”, the author shrieked, “grunts, pants, moans, the better to depict the love scenes as naturally as possible. And ‘love’ is smeared throughout the opera in the most vulgar form.” The composer's use of “petty-bourgeois formalistic contractions” was held to constitute a ‘political transgression.’ The assassination in words goes on in this tone, till it reaches a chilling crescendo –“This is playing at things beyond reason that can only end very badly.”

This was a dangerous time. All of Russia was listening to the overture of a new production: the Great Terror was in its opening stages. Later that year the first of the Moscow Show Trials was to open. Soon millions would be swept away, guilty, most often, of no greater crime that being alive at a particularly malevolent period in history.

To be an artist, young and alive was not very heaven; it was often a death sentence. So many went into oblivion, poets like Osip Mandelstam and writers like Isaac Babel. For months after the Pravda article Shostakovich lived in his own personal hell, fearful of the night-time knock on his door; for that’s when they came, in the night, most often in the early hours of the morning. His opera had already been ‘disappeared’. It was to be decades before the original version appeared again on the Russian stage.

In the end the composer survived, though by what caprice is impossible to say. He survived, yes, but only by performing the most abject acts of personal obeisance, including subtitling his Fifth Symphony, full of all of the ‘right’ political and cultural noises, as A Soviet Artist’s Response to Just Criticism. This was the age of denunciation, of all sorts of betrayals, of oneself and of others.

I was there in Moscow, happy to be alive, happy to see Lady Macbeth alive and flourishing in a new Russia, happy that Stalin and the whole Soviet system had been consigned to oblivion. I was happy to take delight in that wonderful mad sensual muddle, that thumping music, full of electric sexual charge.

But there is a lasting casualty of that Pravda attack. Shostakovich was never to write another opera; Lady Macbeth was never to have a successor. Stalin, the petty pace of all mediocrities, creeps in to the last syllable of recorded time. Still, his was a tale told by an idiot, full of sound and fury signifying nothing.