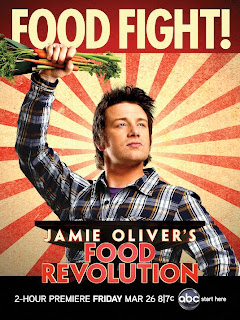 I've discovered that Jamie Oliver, a telly cook who could bore for England, not content with lecturing us on what to eat is now lecturing America in a show called Food Revolution. What follows is my response to this news, posted on a discussion thread. It’s been slightly adapted for use here.

I saw this thread yesterday and decided to hold back, for the simple reason that my first emotion was one of anger at the subliminal message that is being peddled by this ghastly cook, this frightful male Mary Poppins. The reference here is a deliberated one, but let me hold off on this for a bit until I've made some more general points.

So, his preaching from the culinary pulpit is being broadcast in the US as Food Revolution, is it? One should always try to understand revolutions, in politics or in food, by looking at previous examples, by looking at the route they have taken. In this regard America’s present is our past.

The last government here, the government of Tony Blair and latterly Gordon Brown, was one of the worst in our history, chipping away systematically at all sorts of civil liberties, seeking to micro-manage lives, right down to the most intimate and personal levels. Things got so bad that it was even the subject of a book - Philip Johnston’s Bad Laws. In the introduction he made the following points;

Yet despite the claim to represent the British people, New Labour actually felt like an alien interloper in an ancient land, preaching the fetish of modernism and despising tradition. It evinced a predisposition to micromanage individual behaviour and ride roughshod over liberties, both of which are very non-British traits.

I wrote my own gloss on this book, posted on 17 May last year (Bad Law), but for short here is one key passage;

Yes, that's one dimension of this appalling onslaught - the fascists of the healthy eating brigade. And who do you think they adopted as an avatar, who do you think Tony Blair adopted as the food guru, one who would bring a 'revolution' in eating, focused on school lunches? I don't think I need to say, do I?

Oliver was sold as the food Poppins; well, he wasn't; that's just how I see it - a sanctimonious, hectoring Hector, who was out to 'reform' the nation's eating habits. Up and down the country schools, anxious not to appear out of step, anxious not to be victimised by the snoopers, the government inspectors and the do-gooders, adopted 'healthy lunches'.

People were even empowered, as I have said, to look at the contents of lunch boxes and send lecturing written warnings to parents if they did not like what they saw. Even in the worst days of Soviet tyranny I doubt things ever went that far. What was the result? 'Healthy' options went uneaten; children went hungry; mothers were seen at school gates, handing through emergency 'food aid.'

It really is appalling that this disease has now hit the States, this nannying Jamie-knows-best approach. I see from one recent news report that Chicago has even banned home made lunches. My God, what’s happened to America, what's happened to the Land of the Free, when this sort of state-tyranny is allowed to pass without major protest? How far are people prepared to allow things to go? What’s next: compulsory work camps for the deviant eaters?

Oliver is no more than the populist face of the nanny state, a lisping culinary megalomaniac and school-dinner obsessive, as Brendan O’Neil wrote in last week’s edition of the Spectator. If that's not bad enough he, so far as America is concerned, is a foreigner, a sanctimonious outsider. Actually if the American people like him so much I wish they would adopt him on a permanent basis. The sooner my country is free of this ass the better.

I'm annoyed; it's obvious I'm annoyed, but I do emphasise it's not at those who watch this show - it's at the lie they are being sold, that people can be corralled like sheep into adopting a 'healthy' lifestyle, the kind of lifestyle sanctioned by Oliver and his insufferable kind. For America to be seduced by this condescending and patronising food moralist is just too awful. If the price of freedom is fat kids then let it be.
Posted by Anastasia F-B at 15:46