Rage against the dying of the light 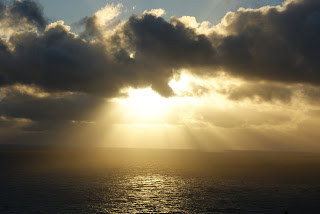 I took part in an interesting debate recently, causing something of a minor storm, all in the best possible fun, the kind of cut and thrust I love. It centred on one simple problem: why do bad things happen to good people?

It was put from a Christian perspective, of course, the dilemma that emerges from the belief that a benign and loving deity governs human destiny. The paradox, though, seems to me to be very modern - that somehow God exists to eliminate the possibility of mishap and chance. In times past Christians would be more inclined to see that life offers no guarantees, that suffering and mischance were part of the human condition.

My response was really quite simple, opening with my favourite passage from Ecclesiastes;

I returned, and saw under the sun, that the race is not to the swift, nor the battle to the strong, neither yet bread to the wise, nor yet riches to men of understanding, nor yet favour to men of skill; but time and chance happeneth to them all.


The point is, surely, that life is all chance: bad things happen to good people and good things happen to bad people; there is no necessary reward in being good, no returns for goodness. Virtue may very well be its own reward, for it rarely brings anything more tangible.

I followed this up by saying that if I were perplexed by this problem, the problem of injustice, suffering and the wholly arbitrary nature of life, I might very well be tempted by Manichaeism, the belief that the universe is a battlefield between the forces of light and the forces of dark; that the material world, the place where ‘bad things’ happen, is the creation not of a benign but a malignant spirit; the creation of Satan.

Reference was made in the discussion to Epicurus, to his view that the gods pay no heed at all to human fate. But there is much more here. I found this passage in The Essential Epicurus which seems to sum up his view, and mine, in a perfectly succinct fashion;

For the assertions of the many concerning the gods are conceptions grounded not in experience but in false assumptions, according to which the greatest misfortunes are brought upon the evil by the gods and the greatest benefits upon the good.

Yes, false assumptions, false assumptions about divinity and goodness. Christians should expect bad things to happen; for Christianity is based at root on the recognition of suffering as part of the human condition; that in suffering there is a path to redemption, the symbol of the cross. For most of history that was the message; it would have been well understood as the message.

Now in the less than spiritual world, the world of iPods, Blackberry and Botox, where no one ever grows old or dies, people are more perplexed when God ‘allows’ bad things to happen to ‘good’ people; perplexed, in other words, by chance. This seems to me to be an unusual state of innocence, born of a naïve theology and a wholly material view of existence, with God simply appended as a kind of celestial warranty.

I’m material, too, a material girl, but I am not deluded, at least I comfort myself with that thought. I hope to do what is right in the course of my life. I don't believe in a personal afterlife, I don't believe in rewards and punishments. Above all suffering for me is not a virtue but a vice. We have one life on this plain and no other. Celebrate it as it is and accept that mishap may happen at any time. Always rage against the dying of the- earthly - light.

Do not go gentle into that good night,
Old age should burn and rage at close of day;
Rage, rage against the dying of the light.

Though wise men at their end know dark is right,
Because their words had forked no lightning they
Do not go gentle into that good night.

Good men, the last wave by, crying how bright
Their frail deeds might have danced in a green bay,
Rage, rage against the dying of the light.

Wild men who caught and sang the sun in flight,
And learn, too late, they grieved it on its way,
Do not go gentle into that good night.

Grave men, near death, who see with blinding sight
Blind eyes could blaze like meteors and be gay,
Rage, rage against the dying of the light.

And you, my father, there on the sad height,
Curse, bless me now with your fierce tears, I pray.
Do not go gentle into that good night.
Rage, rage against the dying of the light.