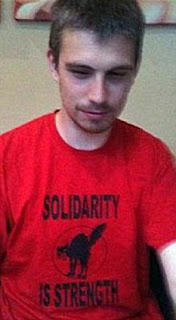 Thanks to the Sunday Telegraph I am able to put a name to one of the oiks behind the recent peaceful riot in London. He is Jack Upton, the son of Jonathan Upton, who was head of the Labour Party’s corporate development when Tony Blair became prime minister in 1997.

Upton Junior, apparently know to his many friends and admirers as Captain Anarchy, heads a group calling itself the Brighton Solidarity Federation (thoughts of the Judean People’s Front or the People’s Front of Judea leap to mind), which wants to overthrow the government – naturally – and end ‘wage slavery.’

It just so happens that the Cap’n is a ‘wage slave’ himself, working, or pretending to work, for Brighton Council as an information officer. No, I don’t have any idea what that is either. I may very well write to the Council suggesting that they should do the decent thing and liberate the poor man from his present burdensome condition and, by happy coincidence, reduce the council tax for the good people of Brighton by whatever amount it takes to enslave an information officer. We might have stumbled on a major solution to the country’s financial problems here – end all wage slavery in the public sector. No more information officers, thank you very much.

The dear Captain, a graduate of Essex University, also runs a website for the aforementioned Brighton Solidarity Federation, steers the ship, you might say, a steady hand on the wheel. It was on this site that an article was published, revealing what a lovely time the members had in London, joining with like-minded morons for a spot of anarchist bovver, a photo helpfully provided of a masked man hurling a bottle at the window of a bank. “When we arrived,” the writer proceeds, “we met up with other anarchists who had the same idea.”

It wasn’t the Captain who wrote this article, you understand; of course it wasn’t. No, he’s been busy denying that he was even took part in the ‘peaceful protest’. But, alas, his Twitter feed, which he has been desperately trying to remove, suggests otherwise, suggests that @stormingheaven, the self-styled “Angry commie from Brighton”, was there in spirit, deed and person.

The Telegraph was really quite coy about Captain Anarchy Angry Commie from Brighton’s tweets, but this is not a family newspaper and I operate under no such restrictions. So, hold tight and read the kind of English favoured by Essex alumni. “Ed Milliband. (sic) Doesn’t matter what you say, you are a fucking cunt. Ed Milliband (sic) – this is how it feels to be an irrelevance.”

Having dismissed the irrelevant Mili Minor, the author goes on urge people to join the south London feeder march, with the enticing promise that “his majesty the violent minority rises again.” He, she or it goes on to say that he, she or it feels like going back to its yoof – “but seriously, fuck all police. Vile, disgusting scum.” Captain Anarchy (oh, no it wasn’t him) would know all about vile, disgusting scum, I feel sure.


The poor wage slave has been in such a tizzy. Not only has he –unsuccessfully- been trying to delete his Twitter profile but he has been saying that he has nothing to do with the Popular Front for the Liberation of Brighton, though his many friends, admirers and followers continue to refer to him as “our glorious leader” on their own internet postings.

Apparently the same “glorious leader” is now saying that he has been a “bit out of the loop” recently, loopy, yes, but out of the loop. When asked about the website he said "Yes. I think they use my credit card. I’ve no real involvement with them.” What, the Captain has a credit card which he lends out in his munificence? It makes one wonder just how deep in wage slavery information officers employed by Brighton Council really are.
Posted by Anastasia F-B at 15:26