Happiness and the Pursuit of…Salt 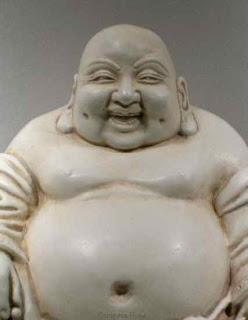 Life, Liberty and the pursuit of Happiness are the three words that form the most recognisable cornerstone to the American Declaration of Independence, the very essence of Jeffersonian principle. I’ve always wondered how one manages to ‘pursue’ happiness, and what one does with it once the elusive little beastie is caught; but this is not the time raise quibbles, especially as the Chinese have now set out on the hunt.

Yes, indeed; last month the National People’s Congress added happiness as one of the commodities to be over-fulfilled in the next five year plan. But it has a special importance in the great scheme of things, more important, officials insist, than increasing GDP. The new plan has been greeted as a blueprint for a “happy China”, though Wen Jiabao, the prime minister, forgot to put on his happy face when he made the announcement, at least according to the report I read recently in The Economist.

Forget about the Liberty element of the equation – Harmony in the old Confucian style and Happiness in the new Communist style are the motors behind a fresh Great Leap Forward, to a world of happy grins and make-believe. Earlier this year officials in Guangdong province announced that it would become “Happy Guangdong”, responding to a cue from Beijing to the effect that the Glorious and Happy Chinese Communist Party wanted citizens to have “glorious and happy lives.” Seriously, I’m not making any of these phrases up!

I have no idea if Thomas Jefferson had an exact definition of happiness beyond the opportunity to lead a useful and fulfilling life, but you can be sure that the Chinese leadership does, a definition that does not include any unwelcome notions of freedom, or even free access to the internet, where the Great Firewall gets higher and Higher by the day, just in case people realise that they are not quite as happy as they should be, that happiness maximisation is falling far short of the quotas.

I can provide you with one small illustration of the problem – salt. Yes, salt. No sooner had Wen made his monumental announcement than the Chinese people were unhappy enough to begin a rush on salt stocks, a wave of panic-buying triggered by a rumour that the iodine in salt was an effective antidote to the potential radioactive fallout from Japan’s stricken Fukushima nuclear power plant.

Official denials were issued. “It’s nonsense”, declared the government, with the result that the salt panic spread still further! People were observed leaving supermarkets, their baskets over-fulfilled with salt. When supplies ran out they turned to soy sauce and fermented bean curd for their saltiness.

So, I now know what happiness is in China and how one pursues it – just trot along to the local supermarket, hoping that salt has not been pursued out of existence. I imagine future statistics will reflect this sudden upsurge in the GHI – the Gross Happiness Index. Be happy, be Chinese, buy salt. 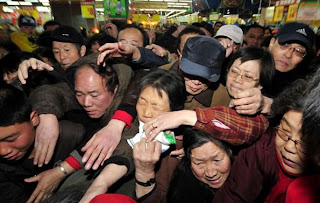