Up and down the greasy pole 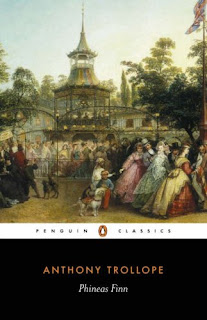 The book touches on politics at a whole number of levels. There is the obvious parliamentary dimension, with a thorough-going exploration of the great question of the day, that of electoral reform (it was written against the background of the Second Reform Act of the late 1860s). There is also an entertaining exploration of sexual politics. I find Trollope’s female characters highly admirable, intelligent and well-informed, generally more so than the men. Add to this the politics of personal choice, of integrity, of the conflict between public duty and personal conscience then the mixture is beguiling to a splendid degree.

I have my own personal dilemma. How does one review a classic like this? Is there anything new to be said? I note that many of the reviews on Goodreads simply rehash the plot, which, quite frankly, does not seem terribly imaginative. I’m only going to go as far as saying that the novel is shaped as a kind of rake’s progress, except that Finn isn’t really a rake! In the end he makes the right choice, which – apparently - destroys the political prospects that he has managed to build up, as an outsider, as an Irishman, as a parvenu in a very exclusive English political club. So my review is more of a personal exploration, a series of impressions on the central themes.

To begin with I have to say that it took me a long time to warm to the character of Finn, whom the author continually refers to in a rather irritating fashion as ‘our hero.’ For all his charm there seemed to be no real substance to the man, nothing to explain his rapid ascent through the ranks of the Liberal Party, even so far as becoming an undersecretary of state in the government. He is a man of principle and a man of passion, yes, but both seemed to me to be in inverse proportion to his talents and to his ambitions. Above all, he has a rather irritating and ingratiating style. In essence my assessment of the man is precisely the same as that of Violet Effingham, one of the four women he has a dalliance with;

Mr Finn, when I come to measure him in my mind, was not small, but he was never quite tall enough. One feels oneself to be a sort of recruiting sergeant, going about with a standard of inches. Mr Finn was just half an inch too short. He lacks something in individuality. He is little too much a friend to everyone.

In the introduction to my Penguin edition John Sutherland says that the character comes near to being a kind of political gigolo, which I think was probably the author’s intention, though he doubtless would not have expressed it in such terms. Finn is saved from the fate of a gigolo – just - by the greater power of moral conscience, which, at the end, offers him a measure of redemption.

Finn’s Dilemma, a possible alternative title, is that he has never really established himself in life before he begins his political ascent. A penniless barrister who has never practiced his profession, he decides to enter Parliament at a time when the only payment was for members of the treasury bench. Politics at this time was a rich man’s game, and I really do mean man. Trollope’s women, outsiders by sex, no matter how wealthy, have their own political ambitions - to host salons and live a public life vicariously through marriage, because there was no other way at a time when they could neither vote nor enter Parliament.

As I have said, Finn, initially dependent on his father, an Irish country doctor, for financial support, eventually makes his way into office as an undersecretary to the colonies, which comes with a decent if uncertain salary. Elections and defeat in elections are always just round the corner! This solves one problem only to add another – his office, and his salary, depend on loyalty to the ministry, robbing him of the freedom to speak out on certain issues, particularly that of Irish tenants’ rights.

He also has a way out like the women in the novel – he can make an advantageous marriage; in other words he can link his star to an heiress! His search for a partner is one of the central platforms of the evolving story. His feelings seem genuine enough; his feelings, first, for Lady Laura Standish and subsequently for Violet Effingham and then, tentatively, for Madame Max Goesler, are authentic enough – he is no naked fortune hunter –, but his desire for money to support his political career seem just as authentic. The ease with which he transferred his feelings from Laura to Violet suggests that his love, or his infatuation, is never that deeply rooted.

Was this Trollope’s intention, to suggest something ‘insubstantial’ in Finn’s character? Even his duel with Lord Chiltern, his friend turned rival in the pursuit of Violet, seems almost be based of on a kind of affectation, something not quite real about it all. Love here seems all about profit and calculation. It’s as well to remember, too, that Finn’s pursuit of one heiress after another is all against a background of an ‘understanding’ he has with one Mary Flood Jones, his childhood sweetheart back in Ireland, charming, beautiful, intelligent and – wait for it – penniless!

In many ways Finn’s dilemma interested me less than the dilemma of the female characters; the dilemma of Laura, who finds herself locked in a loveless marriage to Robert Kennedy, a dour Calvinist Scot, who, though a prominent member of the Liberal Party and a cabinet minister, frustrates his wife of her vicarious political ambitions; frustrates her in every other sense as well in a wholly sterile union. Then there is Violet, rich but not free, unable as a single woman to set up an independent household without offending the mores of the age, who in the end seems the accept the relentless pursuit of the temperamentally unstable Chiltern merely to escape from Lady Baldock, the old dragon aunt who guards her lair!

Trollope writes with such verve. The hunting scenes with Finn and Chiltern will delight all sportspeople with their descriptive energy, the very thing that I picked up from the passages dealing with the same subject in Can You Forgive Her?, the predecessor to Phineas Finn. Overall there is much to delight here, an excellent exploration of high Victorian attitudes to politics, to morality and to money. On the downside Trollope has a tendency to intrude his own political obsessions overmuch, particularly over the question of the secret ballot, a measure which he opposed. And, my goodness, how much he lets this King Charles’ Head float into the narrative!

Ever onwards I go, now looking towards The Eustace Diamonds.
Posted by Anastasia F-B at 15:51