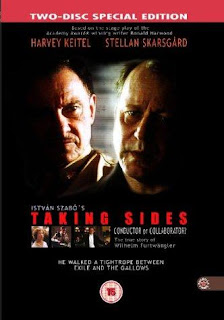 A few days before Christmas the BBC broadcast Taking Sides, a movie based on a play of the same name by Ronald Harwood. Directed by István Szabó, it’s based on the post-war interrogation of Wilhelm Furtwängler, best known as conductor of the Berlin Philharmonic Orchestra, part of the denazification process instituted by the Allies in the wake of their victory over the Third Reich.

Furtwängler himself is played by Stellan Skarsgård, with Harvey Keitel taking on the role of Major Steve Arnold, his US Army inquisitor. In the minor key it’s about the clash between two contrasting personalities; in the major it explores the relationship between art and politics or, better said, the artist and politics. It’s also about taking sides.

It made me take sides, but not quite in the way that I expected. Szabó has previously explored the relationship between artistic integrity and moral corruption in Mephisto, a clever movie full of subtle ambiguity. I found Taking Sides to be neither subtle nor ambiguous. Whether it was the director’s intention or not, my sympathies were all with Furtwängler, a controlled performance by Skarsgård, confronted by an interrogator who turned out to be a spiteful and petty-minded philistine.

There is a message here, certainly, though I can’t be quite sure what the message was. At one point it even appeared to suggest that the art itself was corrupt, that the high culture of Beethoven and Schubert was evidence of corruption, listened to in docile silence by the Germans, cut and contrasted with American army personnel jitterbugging to a band performing Route 66.

Furtwängler essentially stood condemned by one thing: he stayed when so many others left. Not only did he stay in 33 but he became one of the prize trophies of the Nazi Regime, Hitler’s favourite ‘band leader’, as Major Arnold puts it, a monolith in what had been turned into a cultural desert. Many of those who did leave, particularly Thomas Mann, never forgave the conductor for his ‘apostasy’. Furtwängler’s defence, one that he offers to Arnold, was that he believed it possible to separate art from politics and – just as important – he could not abandon his country in the midst of spiritual darkness.

He was naïve, yes, but was he culpable? After all, he did not have the perfect knowledge of 1945, the knowledge of men like Arnold, whose self-righteous indignation is given added fire by footage of bodies being bulldozed into burial pits at Belsen Concentration Camp. Arnold, who previously announced that “I’m gonna get that fucking bandleader”, proceeds to try to pin him down as an active Nazi collaborator, though all the evidence is to the contrary: he may have performed for the regime but he kept his distance, never joining the Party, never giving the Hitler salute, helping Jewish musicians as he was able.

There is a germ of a first class idea here, effectively ruined by Keitel’s bombastic performance. I have no idea if this is a true representation of the real Major Arnold, but in the movie he’s depicted as a loud-mouthed bully, one whose petty humiliations of Furtwängler, looking ever more vulnerable, even alienates his assistant, a young Jewish lieutenant, and his German typist, herself a victim of the regime. Keitel’s Major Arnold, no matter how well-intentioned his motives, no matter how justified he is in his contempt for the morally blind, is no more than a self-important and abusive little philistine. He is no more, to put it another way, than a Nazi.

Although Furtwängler was finally exonerated of all ‘charges’ against him by a later denazification trial the movie ends with a voice-over by Arnold, saying that he had ‘winged’ him and that he was never allowed to conduct in the United States. But then, over the closing credits, footage of the real Furtwängler is shown, performing to an audience which includes Joseph Goebbels. At the conclusion the Propaganda Minister shakes his hand. The conductor is then shown surreptitiously wiping that same hand with a cloth.

I think I should finish with the testimony that he himself gave when he was examined by a German court, words I imagine beyond the comprehension of Major Arnold and all who walk in his shadow;

I knew Germany was in a terrible crisis; I felt responsible for German music, and it was my task to survive this crisis, as much as I could. The concern that my art was misused for propaganda had to yield to the greater concern that German music be preserved, that music be given to the German people by its own musicians. These people, the compatriots of Bach and Beethoven, of Mozart and Schubert, still had to go on living under the control of a regime obsessed with total war. No one who did not live here himself in those days can possibly judge what it was like.

Does Thomas Mann really believe that in 'the Germany of Himmler' one should not be permitted to play Beethoven? Could he not realize that people never needed more, never yearned more to hear Beethoven and his message of freedom and human love, than precisely these Germans, who had to live under Himmler’s terror? I do not regret having stayed with them.