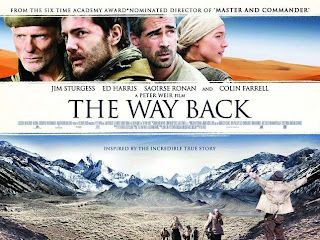 The Way Back is based on a true story, or creative fiction, or a pack of lies, depending on your point of view. Directed by Peter Weir, the movie tells of the escape in 1940 by a disparate group of prisoners from a Soviet labour camp somewhere to the north of Lake Baikal, recording their subsequent trek through the frozen wastes of Siberia, across the parched Gobi Desert, on to Tibet – China seems to be almost completely missed apart from the brief passage of the Great Wall – through the Himalayas – just as mysteriously incidental – and on to India and freedom.

It’s an impressive movie on a visual level, beautifully shot. It’s far less impressive on a human level, with almost no psychological depth or insight. Most of the characters failed to engage me, apart from Ed Harris as the enigmatic Mister Smith, an American engineer caught up in a Stalinist nightmare, and Colin Farrell, the tough, murderous Valka, a Russian zec or criminal inmate who escapes with the ‘politicos’ because his indebtedness to some of his fellow gangsters puts him in danger of his own life. Jim Sturgess as Janusz, a Polish officer and the leader of the group, sent to the gulag as a spy on the forced evidence of his wife, was far too tepid and unbelievable for my taste. The rest of the group left virtually no impression at all.

I should also mention Saoirse Ronan playing Irena, a Polish escapee from a collective farm, who meets up with the group in the neighbourhood of Lake Baikal, the female interest, added, I suppose, to get the guys to come out a little more about themselves and their individual destinies.

I think I’m beginning to sound a tad too negative. This is a good film, one I enjoyed, one that works as a personal and political odyssey, away from communism and towards freedom, in a literal and metaphorical sense. The early scenes in the gulag are good, showing the sheer horror of these places; the horror of logging in arctic conditions on an inadequate diet and the even greater horror of the mines. Life is not cheap here: it has no value at all. In one review I read the author said of Mister Smith – he never gives his first name- that he did not know why he was in prison. That’s just the thing about the gulag system under Stalin: many of the inmates had no idea why they were there either.

The journey itself is compellingly dramatic, though it requires a major leap of imagination to believe that anyone could survive a trek across a four thousand mile wilderness with almost no food apart from occasional game, fish and other scraps picked up along the way. The only natural survivor in the group is the knife-wielding Valka, responsible for the most effective foraging and ruthless enough to contemplate the possibility of cannibalism. But he, paradoxically the only one of the group who actually believes in the lying nonsense of communism – he has Lenin and Stalin tattooed on his chest rather than his arse, as another of the group suggests – refuses to leave Russia.

Yes, the journey is compelling, though it has a tendency to drop into too many triumph-over-adversity clichés. Besides it’s long, too long, as is the movie, almost becoming trudgingly tiresome. In the end even Weir seems exhausted, taking us in a rush through the wintery Himalayas, potentially the most gruelling part of all, down into happy Indian valleys.

The final reception by the tea-pickers is one of only three encounters with human groups in the whole trip. There are the monks of Tibet and before that some mounted Mongolian herdsmen. Then, just before entering the Gobi, the group, with Mister Smith as their spokesman, pass themselves off as American Buddhist pilgrims on their way to Lhasa. American pilgrims in 1940 in the middle of communist-occupied Mongolia on their way south to a Buddhist Mecca, that doesn’t test disbelief, it murders it!

The movie finishes on a rather obvious note, newsreel footage, shown under a pair of trudging feet, just in case anyone missed the message about the other journey, that of history. The footage shows the rise and fall of communism in Soviet-occupied Poland and other parts of Eastern Europe, until the whole corrupt and corrupting edifice collapsed in the late 1980s. Janusz, now in old age, is finally reunited with his wife, forced to betray him all those years before, a moment of pure sentimentality!

Overall nature is the real star of The Way Back, set against an unconvincing script and shallow characterisation. Still, it has an old-fashioned epic feel that has almost completely vanished from contemporary cinema, obsessed, as it mostly is, with rom coms, claustrophobic realism, instant thrills and shallow special effects. It’s a worthwhile, worthy, perhaps, piece of cinema, a generally good movie. With a little more imagination on the part of the script writers, a little more discipline on the part of the director, it might even have been a great one.