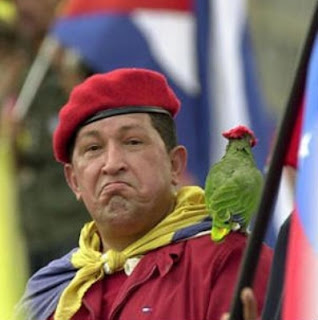 What happens when the legislature turns against the executive, a question that doubtless has engaged Barack Obama since last November? That’s easy: abolish the legislature. If that’s too radical consider the next best thing: get the old legislature to pass an Enabling Act before the new legislature meets.

Ah but American presidents are tied by the safeguards built into the constitution, unlike, say, the president of Venezuela, where the constitution can be set aside with ease. Taking a well-trodden path, Adolf, sorry, Hugo Chavez now has enabling power to protect him and his Communist Reich from the new parliament, recently sworn in following the September election.

Under the new powers the Venezuelan parliament has become something of a political irrelevance, rather like the Reichstag in Hitler’s Germany. Chavez now has the power to rule by decree, while the assembly has been sidelined, meetings now reduced to four days a month. But to make assurance doubly sure all parliamentary commissions have been placed under government control, while speeches in the assembly itself have been limited to fifteen minutes per member. I suppose, on reflection, that’s not a completely bad idea if only it could be applied to El Presidente, who has a tendency to witter on interminably.

Thus it is that dictatorships are built, piece by piece, not just by hamstringing the legislative branch of government but by controlling the media and packing the judiciary with placemen, all part of Chavez’ recent gleichshaltung, which has even extended so far as higher education. He also intends to neutralise the advance of the opposition in local government, having the power to transfer its functions to ‘socialist communes’, bodies packed, of course, with a lot of chavs.

Control of broadcasting and telecommunications has even been extended to cover the internet and mobile phones, just in case someone says something nasty about the government, the said nastiness, incidentally, being on their own heads. According to a report in The Economist punishments will be meted out for promoting disrespect for the country’s institutions or “alarm” among the population. So I guess Chavez is a fat communist pig is out!

Meanwhile, in reference to this, the opposition is calling for peaceful but energetic resistance against government tyranny and the attempt to install a communist system. It’s a cause that has a wide base of support, with labourers joining farm owners to prevent further Mugabe-style land grabs by the chavistas in the area around Lake Maracaibo. Those who have taken to protesting against Chavez’ coup have been attacked by government thugs, injuring many.

If there is any doubt that democracy is dying in Venezuela one should take heed of the pronouncements of Chavez and one of his senior military commanders on the coming presidential election, scheduled to take place in 2013, in which the dear leader is seeking another six year term of office. An opposition victory, they said, will not be tolerated. Revolutions, after all, can only ever go forward on the tracks laid down by history…and by tweets on Twitter. 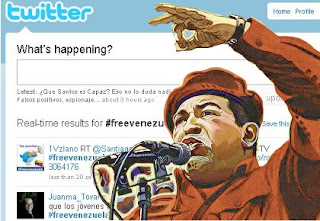