The word of man 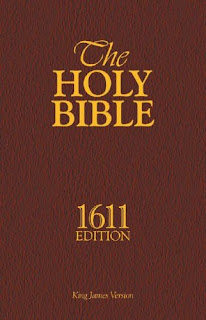 I mentioned last November that this year marks the four hundredth anniversary of the publication of the Authorised or King James Bible, one of the great landmarks of English literature. I’ve since discovered one or two additional interesting facts about the history of a book that was never, in fact, ‘authorised’ by James or anyone else.

As Derek Wilson writes in the January issue of History Today, James may have set the translation in motion but he neither paid anything towards its publication nor did he promote its use. Although the new translation got a royal nod of approval, it was only ‘appointed’ to be read in churches, not commanded. Other versions continued to be favoured according to taste, including the puritan Geneva Bible, translated by exiles during the reign of Mary Tudor.

The original publication, moreover, was beset with all sorts of problems, largely to do with inadequate proof reading. In one of the verses in Matthew’s Gospel ‘Judas’ was substituted for ‘Jesus’. In the account of the crucifixion given in Luke Jesus is said to have been executed with two ‘other’ malefactors. Fundamental errors and poor production meant that the new Bible was slow to catch on. Robert Barker, the book’s first publisher, was unable to recoup his outlays, with the result that he finally ended his life in a debtor’s prison.

Even twenty years after the original publication there were still proof reading and printing problems. A 1631 edition was so bad that it came to be known as the Wicked Bible, omitting the word ‘not’ from the commandment ‘Thou shalt not commit adultery.’ In another place God’s ‘greatness’ was misprinted as God’s ‘great asse.’ No, I’m not joking!

The Authorised Version only really started its steady advance after William Laud, archbishop of Canterbury under Charles I, banned the Geneva Bible, far too puritan for his High Anglican taste. Even then, mirroring the politics of the day, there was a kind of civil war between the holy books, with the Authorised Version only gradually winning out over its Calvinist rival. Its final triumph came with the Restoration of the monarchy in 1660.

The paradox here is that by this time the language used in the 1611 translation was already antiquated in the way that Shakespeare was antiquated. But this only added to its charm and authority, giving it a central role in the rediscovery of a more authentic religion and a more authentic England, uncorrupted by the traumas of the Civil Wars and all that followed.

It was now that the translation, always intended for recitation in church, became a central part of public worship, helped along by the fact that there was no alternative. It was, if you like, the only word of God. But it also took its place alongside the poems and plays of Shakespeare as the word in English, whose beauty and lustre is increased by the passage of time.
Posted by Anastasia F-B at 16:45