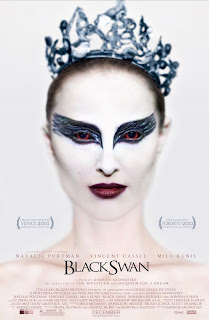 I love dance; I love to dance. Salsa is my dance of choice, something I do rather well, considering I only took it up a few years ago. When I was little it was ballet. I took lessons from the age of five onwards, passing through the various grades, right up to the time just before I went to prep school. Yes, I wanted to be a ballerina, every little girl’s dream. In the end I realised that I did not have the commitment, I did not have the ambition and I did not have an obsession with perfection.

Perfection, that’s what Black Swan is about, the relentless pursuit of perfection, perfection for oneself, perfection for others. This is not a great movie - there are too many clichés concerning female sexuality, psychological frigidity and breakdown for that - but it’s bold, stylish, visually seductive and highly engaging. Above all it's worth seeing for the performance of Natalie Portman, a pirouette of perfection. I don’t like making predictions –I’m invariably wrong! – but I’m guessing that she will win the Oscar for Best Actress, just as Colin Firth will win Best Actor for his part in The King’s Speech. So place your bets now!

I’m dancing too fast. Let me just pause and say that Black Swan, directed by Darren Aronofsky, is a film set around a New York ballet company’s fresh staging of Tchaikovsky’s Swan Lake. Thomas Leroy, the imperious and slightly seedy artistic director, played by Vincent Cassel, as well as planning a novel and starker production is also looking for a new swan to replace Beth Macintyre, the company’s fading and aging star, a brilliant cameo performance by Winona Ryder, echoes, one suspects, of real life. He alights on Nina Sayers (Portman), a dancer who has all of the technical accomplishment to take on a demanding part.

The whole movie is about dualities, about white and black, about good and evil, about doppelgangers, real and imagined. Nina is a vulnerable character to begin with, made more vulnerable in pursuit of darkness, the shadows in her own mind. It’s particularly difficult for her because her experience of real life is almost non-existent. She has emotional and psychological problems, caused not just by her own obsessions, obsessions which steadily turn into nightmares, but by the usual suspect – mummy!

Nina, you see, lives at home with her mother, a single parent, a super performance by Barbara Hershey, chilly, manipulative and controlling. She herself was a dancer, though one who never emerged from the corps de ballet. She is clearly living vicariously through Nina, whom she keeps in a cocoon of childhood, a substitute for her own failures and inadequacies. There is also a slight undercurrent, one suspects, of resentment and jealousy.

Into this complex mix Leroy introduces a new dancer, Lily, brilliantly played by Mila Kunis. What Lily lacks in technique she makes up for in emotional sensuality and experience of life. Here, now, is the central tension of the movie, a fresh duality. Nina is both threatened by Lily and attracted to Lily. Why is she there? Is she a friend or an enemy? Is she attempting to undermine Nina, to replace her? Is Leroy using her as part of plan to make Nina less frigid, less virginal? She is eventually selected as an alternate, though if this is to encourage or to sidestep Nina is uncertain. The ambiguities here are never fully resolved.

Nina both rises to the challenge while descending deeper into isolation and madness, all accompanied by ever more alarming hallucinations. In some ways the movie is difficult to pinpoint in terms of genre. It’s billed as a psychological thriller or as psychological horror. There are certainly elements of both, a distinct gothic veneer with some pronounced creepy moments. I was reminded at points of Suspira, one of my all-time favourite movies, which also happens to be set against the background of dance. If I tell you that Aronofsky lists his influences as Roman Polanski’s Repulsion and Fyodor Dostoevsky’s novella The Double, then you may very well grasp both the approach and the implied ambiguity. There are also slight David Cronenberg overtones, the sort of gross body alterations that one associates with this director!

But I read Black Swan more simply as a story of paranoia and breakdown, of delusions heightened by the pressures of reality, by betrayals real and imagined. I cannot say just how impressed I was by Portman, an actress I’ve never previously rated very highly. When she finally appears on stage as the Black Swan, having discovered her dark side - by what process I am not going to reveal – I was completely overwhelmed along with the audience in the theatre. That scene, those moments, were the highlight of the whole movie, only equalled by her death – literal – as the deceived and betrayed White Swan. This is death and transfiguration; in the end, as she says, she attained perfection.