Nigger Jim and the Devil 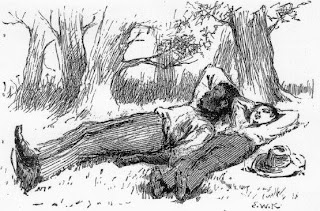 Thanks to a discussion thread on BlogCatalog I now know that New South, a publishing house in Montgomery, Alabama, has produced a bowdlerised version of one the great classics of American literature. Huckleberry Finn has been sanitised, or is it whitewashed? Whitewash, how can I use such a racist expression? It has rather been blackwashed, meaning the word 'nigger' has been washed out! Jim is no longer a 'nigger', a word, incidentally, used by both Huck and Tom Sawyer without any kind of malice or derogatory intent. No, he is simply a 'slave'.

What arrogance, what appalling conceit to start removing words, words chosen with care by the author, a particular word chosen by Mark Twain, simply because it does not meet with contemporary standards of good taste or political correctness. In my response I suggested the next step is to start a wholesale process of going through the literature of the world, removing the words and phrases we do not like, as directed, of course, by the Ministry of Truth. Even the titles of books will have to be changed, including The Black Person of the Narcissus though in the States that will doubtless appear as The African-American of the Narcissus! Once you start this where does it end? Those concerned about ageism will also start to demand repackaging. Let's hear it for The Mature Man and the Sea. You don’t like war and rumours of wars? OK, let's have Peace and Peace.

I suppose it’s of some significance that this censored version has appeared in Montgomery of all places, the first capital of the Confederacy, on the one hundred and fiftieth anniversary of the outbreak of the Civil War. I think they doth protest too much, and by their embarrassment over words shall ye know them. New South would seem to be anxious to bury the Old South, to bury history by corrupting literature, by corrupting the message and the meaning behind literature.

The blogger who raised this raised something else - on his own web page - which exercises my intellect and imagination, namely the alleged anti-Semitism of The Merchant of Venice. The author, Ian Thal, an American Jew, writes "...no matter how often nice liberal do-gooders try to pretend that Shakespeare had liberal attitudes towards Jews, we need to confront how many times his heroes compare Shylock to the Devil..." Before proceeding I should make it clear that he is not calling for censorship; no, he is arguing that work, even allegedly anti-Semitic work, should be read and understood in context.

Those who know me will understand that I'm about as far from being 'a nice liberal do-gooder' as a lion is from a polar bear! But words are so important. To use liberal or illiberal, anti-Semitic or pro-Semitic in relation to Shakespeare is, quite frankly, meaningless. On the balance of probability it's highly unlikely that Shakespeare ever met a Jew, officially absent from England from the expulsion of the late thirteenth to the readmission in the mid-seventeenth centuries. So the attitudes, and the words, the comparison of Shylock, and by implication all Jews, with the Devil is merely a reflection of the prejudices and the caricatures of the day, based, most likely, on stock demonic figures drawn from Medieval morality plays.

The other error here is to read any work of literature as biography, or as a mirror of the author's views; that Antonio and his crowd somehow reflect the attitudes and outlook of Shakespeare himself. It's lazy thinking based on no evidence at all. Think of Shylock, think of the subtlety of his character. Yes, he has malevolent and vengeful qualities but he is not unremittingly bad like Marlow's Barabas; he is not an archetype. He is vengeful because he has reason to be vengeful. He has been insulted all his life by the fops around Antonio, who both need him, need his capital, but treat him with condescension and contempt. Who would not be angry in such circumstances? But look how Shakespeare treats him, giving him some of the most eloquent lines in the whole play;

Hath not a Jew eyes? Hath not a Jew hands, organs,
dimensions, senses, affections, passions; fed with
the same food, hurt with the same weapons, subject
to the same diseases, heal'd by the same means,
warm'd and cool'd by the same winter and summer
as a Christian is? If you prick us, do we not bleed?
If you tickle us, do we not laugh? If you poison us,
do we not die? And if you wrong us, shall we not revenge?
If we are like you in the rest, we will resemble you in that.
If a Jew wrong a Christian, what is his humility?
Revenge. If a Christian wrong a Jew, what should his
sufferance be by Christian example? Why, revenge.
The villainy you teach me, I will execute,
and it shall go hard but I will better the instruction.

This is not a devil: this is a human being; this is a man. More than that, his appearance on the stage probably marks the first time in history that the English were urged to look at a Jew as a man and not as a demon. Such a defence in the Middle Ages would have been unthinkable. In the end he is also a man betrayed, betrayed even by his own daughter, so far as I am concerned one of the most worthless characters in drama, totally without nobility, compassion or a sense of duty towards her elderly father. This may be my modern sensibilities but I like to think it was not that far from Shakespeare's intention. The Merchant of Venice is a great play, full of complex emotions and characterisation. It deserves to be better understood. It is better understood, and not simply by 'nice liberal do-gooders.'