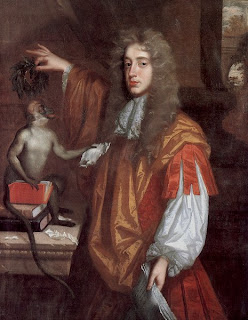 Having reviewed The Libertine I’m in something of a Rochester mood at the moment, rereading a few of my favourite poems. If you don’t know his work I’m guessing that you will be familiar with one brief rhyme notwithstanding;

God bless our good and gracious King,
Whose promise none relies on;
Who never said a foolish thing,
Nor ever did a wise one.

The good and gracious King is, of course, Charles II, with whom he had a rocky relationship. Rochester is such an intriguing man, the best example of the Restoration rake, very much in the fashion set by the monarch himself, and the most trenchant critic of the debauchery of the age, allowing some to suggest that he might even have been a secret puritan!

He was nothing of the kind: he was an atheist - only giving way to belief when his brief life drew to a close - and a cynic, bitingly critical of any form of hypocrisy; and there was no time in history more clothed in hypocrisy and double-dealing than Restoration England. Rochester’s Satyr against Mankind compares with anything Jonathan Swift ever wrote on the subject.

As for Charles the above verse is mild compared with some of the merciless lampooning to which he was subjected by the poet;

In th' isle of Britain, long since famous grown
For breeding the best cunts in Christendom,
There reigns, and oh! long may he reign and thrive,
The easiest King and best-bred man alive.
Him no ambition moves to get renown
Like the French fool, that wanders up and down
Starving his people, hazarding his crown.
Peace is his aim, his gentleness is such,
And love he loves, for he loves fucking much.

Nor are his high desires above his strength:
His scepter and his prick are of a length;
And she may sway the one who plays with th' other,
And make him little wiser than his brother.
Poor Prince! thy prick, like thy buffoons at Court,
Will govern thee because it makes thee sport.
'Tis sure the sauciest prick that e'er did swive,
The proudest, peremptoriest prick alive.
Though safety, law, religion, life lay on 't,
'Twould break through all to make its way to cunt.
Restless he rolls about from whore to whore,
A merry monarch, scandalous and poor.

It’s easy to criticise Charles for his sexual excesses but it’s also as well to praise him for his indulgence. For these verses, which would certainly have meant death in the age of Henry VIII, or, indeed, in the France of Louis XIV, the king’s cousin and contemporary, Wilmot was exiled from court for a brief seven week period. A good, gracious and tolerant King!

For me Rochester is the true laureate of the age, far more than John Dryden, providing so much insight to the great highs and the even greater lows. He was never a puritan but he was most certainly a rebel, the kind of person who never rests easily alongside cant and dissimulation.

After singing Psalm the 12th
He laid his book upon the shelf.
And looked much simply like himself;
With eyes turned up, as white as ghost,
He cried, ‘Ah Lard, ah Lard of Hosts!
I am a rascal, that thou know’st.
Posted by Anastasia F-B at 15:29