Exit, pursued by the dead 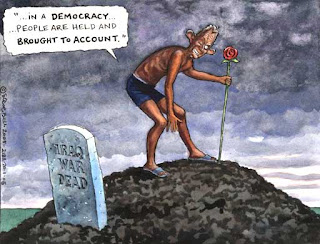 I should really keep off the subject of Tony Blair for one simple reason: I despise him, I despise him so much, I despise everything he represents - the lies, the dissimulation, the phoniness, the general air of seediness and moral turpitude he brings to everything. I find it almost impossible to be dispassionate about this man and I do so hate my judgement being clouded by my emotions.

It’s not just him as a human being that I despise; I despise the degeneracy that he brought to government. If future historians try and pinpoint the moment when cabinet government died in this country I am convinced that they will alight on the Blair years. He appeared before the Chilcot Inquiry on Friday, set up to look into the exact reasons we went to war with Iraq in 2003, the latest stage in a seemingly endless process of self-reflection.

Amongst other revelations it turns out that in the twenty-eight meetings held by key figures leading up to the invasion only half were minuted. Cabinet ministers were also kept out of these discussions. It was all part of the Blair presidency. Never mind second UN resolutions, never mind cabinet agreement, never mind the consent of Parliament itself; no, for he had privately assured George Bush eight months before the invasion that “you can count on us.” It’s the contempt for the mechanics of government, for the constitution, for the way that British democracy works that fills me with the deepest disgust.

This is Blair’s second act. He appeared before Chilcot last January, hands shaking, sweating – much the same as this time – but with a generally gung-ho approach, singing je ne regrette rein to the gallery, filled with people who had lost relatives in his war. He’s clearly been reprogrammed, singing to a different sheet. This time he wanted to make clear that he regretted “deeply and profoundly” the loss of life. It is too late, as some in the audience shouted, it was always too late.

We should remember that most of our people died after the invasion, after ‘victory’, because in the rush to go to war there was an almost total lack of forward planning, little or no consideration as to how Iraq was to be occupied and restructured subsequent to the occupation. The troops we sent were simply not strong enough for the tasks allotted. There was no proper intelligence, no proper understanding of the internal religious and cultural politics of Iraq, with disastrous consequences. Let’s make no mistake about this: Britain suffered a serious humiliation in Iraq, our armed forces suffered a serious reversal because of Blair’s negligence and incompetence. In any other age he would have been indicted before Parliament. It’s rather a pity this is not any other age.

But if one dreadful war was not enough he, this Middle East ‘peace’ envoy (what exactly does he envoy over? who listens to him?), seems to be pushing for yet another, warning of the dangers from Iran. Yes, Iran is a danger precisely because of the 2003 invasion, which removed the one major obstacle to its regional ambitions. It was Blair and Bush who let this genie out of the bottle, impossible, I suspect, to put back.

In his Coffee House blog on the Spectator website Rod Liddle writes that Blair’s performance on Friday reminded him of some of Neil Young’s lyrics from a song called Ambulance Blues, penned seemingly as an attack on Richard Nixon. They fit our former prime minister so much better;

I never knew a man
Could tell so many lies
He had a different story
For every set of eyes
How could he remember
Who he’s talking to?
Because I know it isn’t me
And I hope it isn’t you
Posted by Anastasia F-B at 15:53