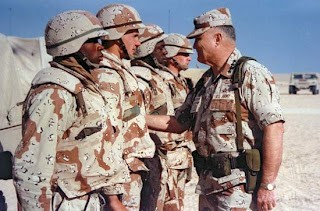 I turn my attention again to the Iraq War, the first as well as the second. My view is quite clear: I think the First Gulf War was wholly necessary; I think the Second a gross strategic error.

Surely there must be a contradiction here? No, not really. The first war was a necessary corrective to an act of aggression by an unstable tyrant, one, unfortunately, we had previously given succour to in his struggle with Iran, which only served to whet his appetite and further his ambitions. Were we to stand by and allow Kuwait, a member of the United Nations, to be conquered and brutalised? Were we to follow the example of the League of Nations, which stood aside as Japan marched into Manchuria and Italy into Abyssinia? I have not the least doubt that if the United Nations had not acted further targets would have followed, possibly Syria, possibly Saudi Arabia.

Alongside these questions of collective security and national integrity there is the question of oil and the need to ensure a stable source of supply. Saddam’s adventurism also presented a threat here, a serious danger to the integrity of the world economy. To allow this man to obtain an effective hold of a good bit of the world’s fuel supply was simply inconceivable.

So, Saddam was kicked out of Kuwait. His army and his air force were pulverised. He was only allowed so much room to manoeuvre freely thereafter. He was effectively in a cage, a cage of our own devising, no matter how hard he rattled at the bars. But that’s as far as it should have gone. Yes, I know he was a ghastly human being and one can only sympathise with those under his rule, especially the Kurds, but it was not our business to ‘liberate’ Iraq. Iraq humbled still acted as a useful counter to Iran in the complex politics of the Middle East. The position prior to the Second Gulf War made good sense in the wider game of geopolitics.

But then came Bush and Blair, the BB partnership on a new crusade. The country was invaded in 2003 on the pretext of finding non-existent weapons of mass destruction. It was invaded against the advice of experts, historians, among others, who tried to alert Dumb and Dumber to the complex internal religious and cultural politics of Iraq. BB effectively kicked a hornet’s nest, to the benefit of no one, least of all the benighted people of the country.

A door was opened, previously closed, to terrorism and the worst forms of ethnic and sectarian murder. Most serious of all, looking at the wider geopolitical picture, military intervention was a total failure, creating at best a weak, unstable democracy, to the immeasurable benefit of Iran, not Britain or America. BB, by their precipitate action, by their arrogance and their ignorance, found a bad situation and made it infinitely worse. They made a desolation not even possible to call peace.
Posted by Anastasia F-B at 00:04