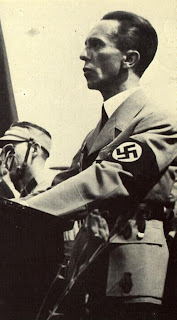 Most of the leading cadres of the Third Reich were, on a simple human level, tiresome bores, Martin Bormann being the most boring of all. There are exceptions, most notably Hermann Goring, the regime’s number-one sybarite, a sort of cross between Nero and Falstaff. But the personality who fascinates me most is Josef Goebbels, Minister of Propaganda, widely known, even among his own party comrades, as the poison dwarf.

Dwarf he certainly was; of large head, slight frame and low stature, he was born with a club foot. In every way he was the antithesis of the Nazi ideal of the Aryan superman, all so much ideological window-dressing. He was also an intellectual, of a sort, in a movement made up of so many thuggish boneheads. Above all he was a propagandist of outstanding brilliance, one who always knew exactly how to tailor a political message. As a speaker he was, at a visceral level, even better than Hitler, evidenced, above all, in his infamous 1943 Total War oration.

Now he is the subject of a new biography – Joseph Goebbels by Peter Longerich, published recently in Germany, with an English translation planned. It’s based on a detailed study of the Propaganda Minister’s diaries – he was a life long scribbler -, emphasising the personal as much as the political. He is depicted as a depraved sexual obsessive, full of mawkish sentimentality.

His affairs during his period of power were notorious. Control over the German film industry gave him control over the casting couch, earning him another sobriquet – the ram. Looking at him, looking at his obvious lack of physical attraction, he seems to be a classic example of Henry Kissinger’s dictum, that power is the ultimate aphrodisiac. But even before he achieved senior office he had a variety of affairs, which suggests a personality with sufficient power to overcome his physical handicaps.

Paradoxically, though he promoted the racial ideals of the regime, even if he did not represent them, the closest he came to downfall was over a passionate romance he had with Lida Baarova, an actress and a Slav. It was only after Magda, Goebbels’ wife, appealed to Hitler, that he was forced to drop her. Thereafter his standing in the inner circle went in to decline, only to be revived during the war, when he became Hitler’s most important lieutenant and the real face of the Third Reich.

I’ve read some of Goebbels’ diaries, fascinating documents, an exploration of his personal politics and his psyche. The most fascinating of all is that for the period of 1925 to 1926, leading up to the point when he was appointed Gauleiter of Berlin. Never intended for publication, they give away far more than the later documents. He writes in a staccato, machine-gun like fashion, brief sentences, often little more than exclamations. This is an obsessively vain individual, preeningly so, almost school girlish in his expressions of sentiment, most dripping of all when it comes to his descriptions of Hitler. There is no better illustration that evil is not always banal. Sometimes it’s histrionic.