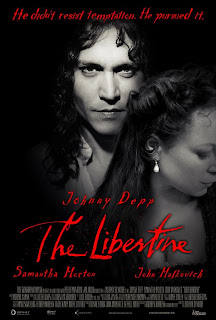 I read Graham Greene’s Lord Rochester’s Monkey, his biography of John Wilmot, second earl of Rochester, arguably the greatest poet, satirist and wit of the age of the Restoration, when I was seventeen. From this I moved to the poetry, much of it gloriously obscene and utterly delightful. So, I liked Wilmot before Johnny Depp, taking on the part of the great libertine, announced at the beginning of The Libertine, a 2004 movie based on his life, that I would not like him, meaning I would not like the poet as a man as opposed to not liking the actor as the poet. Phew!

Seventeenth century England, particularly the period following the restoration of the monarchy in 1660, is my area of particular expertise. The disadvantage in this is that I tend to find historical dramas set in the time immensely irritating, usually because of the cavalier treatment of basic facts (I know, I know; it’s such a bore!). I absolutely hated To Kill a King, set in the Civil War. I did not, therefore, have high expectations of The Libertine, which I saw recently on DVD for the first time.

Surprise: I liked it: I liked Johnny Depp as Wilmot, a first class performance, one of tremendous depth; I liked the feel of the movie, I liked its depiction of Restoration London and Restoration manners. I liked it so much that I was even able to overlook the howling liberties (a syphilitic Wilmot swaying opinion in the Lords during the Exclusion debate!) The script, adapted by Stephen Jeffreys from his play of the same name, was raw and uncompromising, as was the camera work, showing an unremittingly grimy London, corruption and filth in the streets, corruption and filth in the most elevated social circles.

I had fun looking at the reviews on Rotten Tomatoes, most of them carping and negative, most of them mired in incomprehension. Directed by Laurence Dunmore, the film felt like the play from which it emerged, the emphasis being on words and language than action for the sake of action, the first point on which the critics seem to have stumbled. The second was probably their incomprehension over Depp’s performance, not at all what one expects from a Caribbean pirate! But he was so good as Rochester, obnoxious, self-destructive and unremittingly cynical, the perfect mirror of an imperfect age.

He was Rochester as I imagine him, a complex character, loveable and yet not easy to love, angelically satanic, a troubled genius before people knew what a troubled genius was; a Marquis De Sade with intelligence. His life was his art and his art his life. I see him showing signs of existential nausea, a disease of the spirit that really only became fashionable in the last century.

Were I a spirit free, to chose for my own share
What sort of flesh and blood I pleas’d to wear,
I’d be a dog, a monkey or a bear,
Or any thing but that vain animal
Who is so proud of being rational.

Wilmot, if you had seen Depp in your shade you would, I feel sure, have been beguiled and amused. You might even – I hope this is not a step too far – have begun to like yourself.