The Stammering of King George 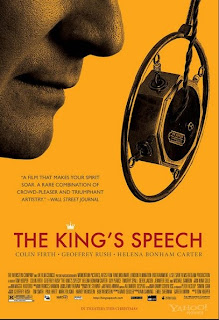 The ending of The King’s Speech was completely over the top. There was the king, George VI, played by Colin Firth, delivering the most important broadcast of his life to the nation and the empire beyond. It’s Sunday, 3 September, 1939; it’s the day Britain declared war on Germany; it’s the day the king walked with destiny.

The nation needed to hear the voice of the king, needed comfort and reassurance. George, who suffered from a debilitating speech defect from early childhood, begins hesitantly, but conducted – literally – by Philip Logue, a speech therapist played by Geoffrey Rush, he makes his way steadily towards the end, all against a background of Beethoven. Among the palace audience, Elizabeth, the queen consort, played by Helena Bonham-Carter, was in tears, a moment of shared emotion, for I, too, was in tears! It was beautifully over the top.

There are some superb supporting roles. Michael Gambon is first class as George V, Bertie’s father, a bullying martinet, and Guy Pearce as David, the future King Edward VIII, a contrast in every way to his shy and diffident brother. Derek Jacobi gives good value as Cosmo Gordon Lang, the archbishop of Canterbury, at once imperious and subservient, and Timothy Spall does his best as Winston Churchill. Spall is a good performer but I seriously doubt that any actor, even the best, can depict Churchill without descending into caricature, amusing and absurd at one and the same time.

If you care about this sort of thing there are some serious historical inaccuracies in the movie, the most obvious of which is the depiction of Churchill as a confidant of Bertie’s during the Abdication Crisis, when Edward, who had since succeeded his father, is obliged to give up the throne because of his insistence on marrying Wallis Simpson, an American divorcee, played here by Eve Best. In fact Churchill was one of the most prominent members of the ‘King’s Party’, Wallis or not, in what must count as arguably the greatest political error of his career.

Still, don’t let this quibble detract from a hugely enjoyable film, a hugely impressive performance by Colin Firth, masterful as always, an utterly convincing stammerer. He shows Bertie as a vulnerable human being, painfully aware of his disability and yet immersed in notions of etiquette and the stiffest forms of protocol that only served to compound the problem.

The thing is, you see, Bertie is a product, a product of his upbringing. Though born left-handed he was made to use his right, one of the causes, supposedly, of childhood stutters. Overawed by his formidable father and mocked by his rather obnoxious brother, his verbal constipation is an expression of the constipation of his personality. It might not have mattered – after all he was only the spare, not the heir – but, as daddy says, the days when all a royal had to do was look good on a horse are over; now they have to speak to the masses. The movie opens with Bertie, then duke of York, giving a speech, sorry, that should be not giving a speech, on behalf of the king at the close of the British Empire Exhibition at Wembley in 1925, clearly an occasion of deep humiliation for him and acute embarrassment for the audience.

Something has to be done, but what? Various methods are tried, including stuffing the poor chap’s mouth with marbles then asking him to read, or the king shouting at him “Get it out, boy!” As a last resort the duchess of York learns of a specialist based in Harley Street who comes recommended. I loved Helena Bonham-Carter in the part, at once puckish and condescendingly snobbish. But Logue – a super performance by Geoffrey Rush – is having none of it. A blunt Ozzie and something of a performer – as it turns out he is a failed actor – he won’t go to the mountain; the mountain must come to him. Bertie, with some reluctance, leaves the cocoon of the palace and comes to Logue’s shabby office. After a start as hesitant as his speech the two men strike up a rapport. This is not the end; it’s not the beginning of the end, but it is the end of the beginning.

Logue achieves two things; he begins to break the duke’s verbal logjam by breaking the logjam of his personality. Cutting through all protocol, he insists on calling Bertie Bertie, though nobody outside the firm has ever dared address him in such informal terms. As the therapy proceeds the two men strike up a kind of friendship, the first the duke has ever had, certainly with a commoner.

As he relaxes his speech also relaxes. But then the real crisis comes: Mrs Simpson comes. Edward, now on the throne, and frustrated in his desire to marry his American mistress, intends to abdicate. Bertie is no longer the spare; he is the man who will be king, like it or not; he will be George VI.

He doesn’t like it; he panics, fearful that he will go down in history as Mad King George the Stammerer, an echo of his ancestor Mad King George the Third. But Logue, rejected at one point for his personal and political importunities, continues to be on hand, seeing his friend through the coronation, despite the resentment of the establishment, most established in Archbishop Lang, and beyond, to that final moment of destiny on the first day of war.

This movie will last, well placed in the stable of royal thoroughbreds along with Mrs Brown, Young Victoria, The Madness of King George and The Queen. It’s a good story well told, well directed and superbly acted. It’s also a movie for the modern age, an age which does not really approve of stuffy royals and court protocol (the relationship with the real Logue was much more formal than the movie suggests). It’s a movie that humanises royalty, one that makes George just another chap, worthy of majesty once he is worthy to be a man.

What infinite heart's-ease
Must kings neglect, that private men enjoy!
And what have kings, that privates have not too,
Save ceremony, save general ceremony?
And what art thou, thou idle ceremony?
What kind of god art thou, that suffer'st more
Of mortal griefs than do thy worshippers?
What are thy rents? what are thy comings in?
O ceremony, show me but thy worth!
What is thy soul of adoration?
Art thou aught else but place, degree and form,
Creating awe and fear in other men?
Wherein thou art less happy being fear'd
Than they in fearing.
What drink'st thou oft, instead of homage sweet,
But poison'd flattery? O, be sick, great greatness,
And bid thy ceremony give thee cure!