The Man who was Chesterton 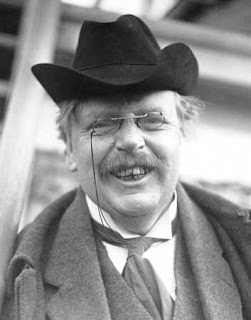 One is invariably being pursued by one’s own prejudices; it takes speed and dexterity to avoid being caught! Unfortunately Paul Johnson, journalist and historian, is not quick enough. In a recent review of The Wit and Wisdom of G. K. Chesterton, a compilation of quotations by Bevis Hiller, he suggests that prejudice (“the BBC establishment has always hated him”) was responsible for a failure to televise the author’s Father Brown stories, though they are, in Johnson’s words, ‘a natural.’

A quick spot of research shows that this is not true. Some of the stories were televised, though not by the BBC. In 1974 ITV, the commercial television station, broadcast a series of thirteen episodes, staring the late Kenneth More in the title role. The series is still available on Amazon.

Johnson goes on to suggest reasons for this alleged hostility by the ‘establishment’, mentioning and dismissing Chesterton’s alleged anti-Semitism in passing, before alighting on the real cause as he sees it - the author’s Catholicism. Knowing Johnson, knowing something of his own background, I really have to say he would, wouldn’t he!

The more likely explanation, the explanation I see, is that Chesterton was one of those uneven writers who just stopped being fashionable. He stands in this regard in the same pantheon as Rudyard Kipling and Hilaire Belloc, somewhere on the outer reaches of imagination and taste; of their times, not ours.

This does not mean to say that he is a bad writer; far from it. I admit that my experience of his work is fairly limited, confined mostly to The Man who was Thursday, a novel published just over a hundred years ago, and some shorter pieces. I haven’t read the Father Brown stories and probably never shall because I consider the detective genre to be a lower class of fiction. There you are: a prejudice just caught up with me!

Still, sifting through The Wit and Wisdom has opened up possibilities, opened up some of the intellectual depths of this Oscar Wilde of the conservative right. I use this comparison deliberately simply because Chesterton made, in brilliant aphoristic style, one of the most telling observations about the fate of Wilde that I have ever read;

We feted and flattered Wilde because he preached such an attitude [a new immorality], then broke his heart in penal servitude because he carried it out.

Chesterton adopted something of the method, if not the immorality, to carry out his own counter-attack on those aspects of modernity that disturbed him most. Some of his observations are trenchant and witty; others just ill-placed and bad tempered, hence the uneven quality. I’ve compared him to Oscar Wilde though Hiller draws an altogether more apt parallel with Dr Samuel Johnson, whom he resembled not just in literary grumpiness but in corpulence!

I suppose Paul Johnson is right in part in suggesting that Chesterton’s faith accounts for some of the prejudice to which he alludes. But it seems to me it was less because he was a Catholic - by conversion, incidentally - than because he was more orthodox than the orthodox, often a symptom of any kind of conversion. His Catholicism seems to have been of a particularly obscurantist, neo-medieval kind, allowing him to dismiss the Enlightenment in one sweeping announcement: “I know of no question that Voltaire asked which St Thomas Aquinas did not ask before him – only St Thomas not only asked, but answered the questions.” This is a mind not so much closed but bolted shut!

There is grumpiness here; there is prejudice, attitudes that do not quite harmonise with the modern age, an observation I feel sure that would have delighted the reactionary old fogey, who wanted to return to a feudal economy where every man – no mention of women – would be allocated “two acres and a cow.” Yes, grumpiness and dottiness but also charm, good prose and intelligence; wit, occasionally, of quite brilliant intensity. What more could one ask for?
Posted by Anastasia F-B at 16:16