A star in the east 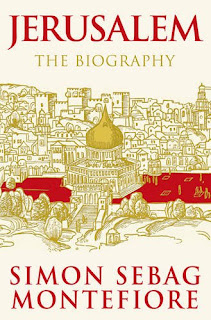 This month will see the publication of Jerusalem: The Biography by Simon Sebag Montefiore, taking its cue, I suppose, from Peter Ackroyd’s London: The Biography. I’m looking forward to this; for he is a superb biographer, having written Stalin: the Court of the Red Tsar and Young Stalin, both exceptional works. There is no better candidate to write the life story of a city.

I visited Jerusalem a few years ago, staying in the King David Hotel, my sitting room looking towards the Ottoman-constructed wall around the old city, the part punctuated by the Tower of David. This city is not part of history; it is history, a heart where the life-blood of three of the world’s great religions flows through. Even my hotel has a story: for the wing I stayed in, formerly British Army headquarters, was blown up by Irgun, a militant Zionist organisation, in July 1946, as the video channel helpfully reminded us!

Jerusalem is really an odd amalgam of the old and the new. It’s two cities, existing side by side never meeting, cultures never melding. The old city, where the Church of the Holy Sepulchre is located, supposedly on the Hill of Calvary where Jesus was crucified, is a complete warren. I suspect not an awful lot has changed since the days of the Ottomans.

After we visited the Church we turned the wrong way, ending up in narrow and narrower streets full of Arab traders, all wearing the keffiyeh, the traditional headdress. I have to say the deeper in we got the more uneasy I became, feeling completely out of place, completely déclassé and alien, all the more so being a female with free-flowing hair, not that anyone was in the least threatening; it’s just that we were the only westerners there, thus all the more conspicuous. I was really quite glad to get out after we traced our way back.

Returning to Montefiore’s book, there is a taster in January issue of History Today, where he has a look at the city during the heyday of the medieval Crusader state (Jerusalem: Dark and Satanic). It’s the little details that fascinate me, the comparison that can be drawn with other times and other places; for Jerusalem in the twelfth century was the centre of the Wild East! This is the time when the incorrigible Melisende was queen. She was also the wife of Fulk, Count of Anjou, the descendent of the depraved Fulk the Black, son of Fulk the Repulsive, nephew of Fulk the Complete Bastard. OK, I made the last Fulker up but the others are real enough. :-)

The city was really a combination of royal capital and frontier town. It was the place to be for fortune hunters, adventurers of all sorts. There were as many taverns as holy places; for this was a town of soldiers as much as a town of pilgrims. Each of the taverns apparently had a clunking chain across the entrance to prevent knights riding into the bar! Saladin’s secretary, who was able to observe things at first hand, describes the prostitutes, who arrived at the ports of Acre and Tyre in boatloads from Europe, thus;

Lovely Frankish women, foulfleshed and sinful, appearing proudly in public, ripped open and patched up, lacerated and mended, making love and selling themselves for gold, callipygian and graceful, like tipsy adolescents, they dedicated as holy offering what they kept between their thighs, each trailed the train of her robe behind her, bewitched with her effulgence, swayed like a sapling, and longed to lose her robe.

Where holiness goes sin is never that far behind!

Jerusalem, as the author says, is in so many ways the universal city; the city of Solomon, Saladin and Suleiman; of Cleopatra, Caligula and Churchill. There is a cast of thousands here, prophets and warriors, politicians and preachers, the famous and the infamous. Disraeli was there as was Rasputin, Mark Twain and Lawrence of Arabia. I was there.
Posted by Anastasia F-B at 16:21