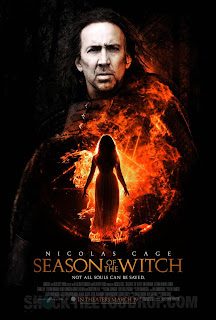 There is one glorious snippet of information I discovered about Season of the Witch: Dominic Sena, the director, was apparently inspired by Ingmar Bergman’s classic The Seventh Seal, in which a knight returning from the Crusades meets Death in the midst of his plague-stricken land. If I tell you that Bill and Ted’s Bogus Journey does it so much better you might get a flavour of this movie!

Starring Nicholas Cage as Behmen and Ron Perlman as Felson, two crusading-weary crusaders, Season of the Witch is a sword and sorcery romp, the sort of thing I normally love. I say crusaders but I could not honestly say which crusade these guys are on – it’s set in the fourteenth century-, who they are fighting or for what end. I can’t even say which crusading order they belong to, though I would have to guess the Teutonic Knights, judging by the black crosses on their surcoats. Actually it’s much more of a Western, or the kind of medieval scenario that might have been found by a Connecticut Yankee visiting the Court of King Arthur!

This is not a bad movie; it’s an awful one. The script is shallow, the editing incompetent, the dialogue laughable and the acting dreadful. It might actually have been quite effective as parody – it certainly carries slight Monty Python overtures – but unfortunately it takes itself too seriously. I have to say that there were points I almost laughed out loud at some of the one-liners. There is Behmen comment on the number of times he has saved Felson’s ass, or his aside in one battle that whoever slays the most men buys drinks.

The one- slightly- bright spot is Perlman, who can do medieval quite well. He was superb as the grotesque monk Salvatore in the film adaptation of Umberto Eco’s The Name of the Rose. I had the feeling here that he was the only one to recognise the absurdity of the script, hamming it up accordingly. He only needed a cigar to complete the effect of medieval Europe by way of the Mid-West, playing a kick-ass Sir Rambo. But in the end he was a victim of a director who could not make up his mind about which direction he wished to travel.

Anyway, these two cowpokes, sorry make that knightly buddies, decide enough is enough after about a dozen years of murder and mayhem on behalf of the church. Deserting the cause, they find themselves in a plague-stricken land. It’s the fourteenth century so we are in Black Death country…or are we? As the pals mosey along into town they are recognised as apostates and brought before the local big-wig, a cardinal by the name of D’Ambroise, his face so disfigured by plague pustules, buboes and boils that it’s quite impossible to recognise our own Christopher Lee!

Now the terrible truth is revealed to Behmen and Felson: the plague, it turns out, is not caused by microbes – they didn’t exist in the middle ages -, bad air or Jews poisoning wells; no it has been caused, so the Cardinal believes, by witchcraft, or rather by one witch in particular, only ever identified as ‘The Girl’, played by Claire Foy.

In return for absolution the chums are asked to escort her across country to a distant monastery, where the monks possess knowledge, drawn from a secret book, that will determine whether ‘The Girl’ is a witch or not and lift the curse. They eventually agree, but only on Behmen’s insistence that she gets a ‘fair trial.’ A fair trial, on an accusation of witchcraft in the Middle Ages! Here we are firmly back in Wild West country – we’ll give her a fair trail and then we’ll burn her at the stake!

It get’s funnier. The party is made up of a priest called Debelzaq, played by Stephen Campbell Moore, almost invariably pronounced, at least to my ear, as Da Ball Sac, and a guide by the name of Hagmar, played by Stephen Graham, an English actor who affects here a bizarre American accent in a time centuries before America was discovered. With ‘The Girl’ safely enclosed in a caged witch-mobile off we go.

I say it gets funnier but the humour soon dries up. We are not in the heart of darkness, just the heart of dullness, stock images and unimaginative clichés. At one point the path is intercepted by a precipice that can only be crossed by – guess what – a rickety old rope and plank bridge, possibly left over from an Indiana Jones movie set.

In the end it turns out that the witch is not a witch at all. No, she is simply possessed by a gargoyle – at least that’s what the computer-generated image looked like – which manifests after the chaps try a spot of do-it-yourself exorcism, the monks all being dead from the plague. The appearance of the beast is the occasion for the movie’s most memorable line, Da Ball Sac’s immortal “We are going to need more holy water.” The thing is, you see, the said demonic gargoyle, replete with a wonderful set of wings, fooled everyone into taking him to the monastery so he could lay his claws on the monks' secret book and thus plunge the world into darkness. If he had only flown there he would have saved himself, and us, a wholly wearisome journey.

Even the finale, an extravaganza of demon-bashing and chopping up of ninja-monks, brought to life by possession, is just too silly to engage on any emotional level at all, even one of simple visceral excitement.

Season of the Witch is clearly just another milestone on the seemingly downward spiral in Nichols Cage’s career, so sad when compared with how brilliant he once was in movies like Leaving Las Vegas. Here he is hopelessly out of place, hopelessly miscast, reciting banal lines with a dream-like lack of engagement. I was tempted to write that this movie is so bad it’s actually good, right up there with the Ed Wood masterpieces; but it’s not – it’s just bad, dull and predictable.

Incidentally, ‘The Girl’, the witch who is not a witch, is given a voice-over at the end, telling us her name at last. She is Anna. :-)