The Rough Guide to Eternity

It’s the most fearsome court you will ever face. There you are, standing in a long hall. At the far end sits Osiris, the god of the underworld. To approach him you have to pass a gauntlet of terrifying mummified gods. If you are not already scared out of your wits the Swallower of Shades, the Bone Breaker and the Eater of Entrails should send you into a condition of total collapse. Just when you think things can’t possibly get any worse, they do. Here comes the prosecutor, Thoth in the shape of a baboon, sitting on top of a pair of scales that will shortly determine your eternal fate.

Nil desperandum. You have long prepared yourself for this court that no mortal can escape: you have taken out an insurance policy; you have in your hands the Book of the Dead, a sort of Rough Guide to the afterlife, with all sorts of helpful hints on how to address the locals, no matter how elevated. 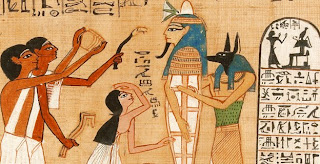 In Ancient Egypt life was nasty, brutish and short. No, let me rephrase that: it was nasty, brutish and very short. Everywhere one is surrounded by a cult of death, by reminders that this life is a mere antechamber to eternity. The Book of the Dead is therefore an essential acquisition for the literate, full of helpful spells and incantations. We call it the Book of the Dead for obvious reasons, but for the Egyptians in the shadow of the pyramids it was known as the Book of the Coming Forth by Day.

This fascinating document is the subject of an exhibition in the British Museum, scheduled to run until March. Do go if you can; it’s a journey that you are unlikely to forget, taking a path trodden thousands of years ago into the heart of Egyptian mythology, magic and mysticism; a path trodden by the ba, the spirits of the dead.

There is a tunnel at the end of which lies the promise of eternal life, provided one can negotiate a way past the terrors ahead, not just the ultimate judgement but all sorts of demons and monsters. The book is full of spells for fighting off crocodiles and serpents, animal and insect terrors of all sorts, including an entity simply known as The Creature that Swallows the Ass!

Using the right words, one is able to avoid decapitation and decomposition. Another possible danger was being turned upside down, which entailed, as the Egyptians saw it, a reversal of the digestive process. The Book is even prepared for this, some versions including a spell “for not eating excrement or drinking urine in the underworld.”

So, the ba has made it this far, through a series of portals, each guarded by a terrifying gatekeeper. Safe passage has depended on saying the right words, all contained in your guide. The most important test of all comes in a place called the Hall of the two Maats, where Osiris presides with his forty-two companions, where one’s earthly conduct is weighed in the balance, weighed on scales presided over by Anubis, the jackal-headed god. In one pan sits the image of truth; in the other your own heart.

This is it; this is the ultimate test. If one has led a good life the scales will balance. If they do not then the next appointment is with the Devourer, a dreadful beast with the head of a crocodile, the body of a lion and the haunches of a hippopotamus. The Devourer feasts on the hearts of those who have failed, which involves a second death, one of complete oblivion. Don’t panic, even if you have not exactly lead a blameless life. Open your Book at spell 30B and repeat slowly; 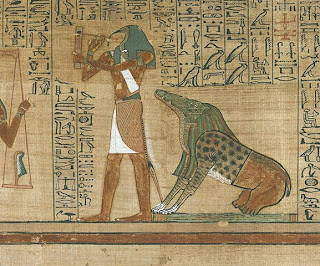 The interesting thing about this is that while the Egyptians were the first to conceive of a direct relationship between one’s eternal fate and one’s conduct while alive, they still believed it possible to avoid unpleasant consequences in death by trickery. Their gods may have been awesome but they were clearly not all-knowing! In theory, therefore, it would have been quite possible to have been a thoroughly bad person in life and still make it into celestial bliss. It was the Christians who carried the process of judgement through to a logical conclusion.

So, you’ve made it; you have found a way through; the court has declared you blameless. What next, you may wonder? The goals are actually quite varied, differing from Book to Book. In one you might sail with Ra, the sun god, in his chariot across the sky; in another you would live in the underworld, blessed by the presence of Osiris. The third and most common possibility was to live in the Field of Reeds, essentially a divine and perfect version of all that you knew on earth. There the corn grew to unimaginable heights.

Corn? But surely that involves sewing and reaping; surely that involves, ahem, work? Again there is no need for concern, for the Book of the Dead is ready to provide you with one final service. Amongst the things you have carried into the underworld is a small figurine called a shabti. Simply recite spell 6 and it will do all the work for you. Relax; lie back and do whatever one does when there is nothing else to do. You have made it into the Egyptian Paradise.