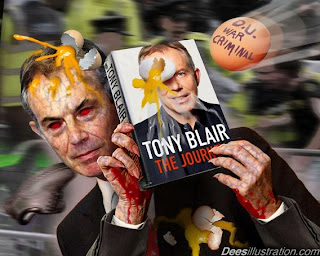 Do you believe in curses? Do you believe that there are those condemned by fate to wander the world, never resting, never able to put down roots, moving, always moving? I’m sure most people will be familiar with the story of the Wandering Jew or the crew of the Flying Dutchman. Let me add a third; let me add Tony Blair, the erstwhile Prime Minister, who appears to be labouring under a similar burden, destined to become more unfortunate than either the Jew or the Dutchman; destined to pass into legend as Cosmopolitan Man.

They seek him here, they seek him there; people seek him everywhere. Is he in heaven or is he in hell? Well, yes, I suppose he is in a kind of hell, a limbo not quite of this world; a rootless refugee, a habitué of airport lounges and luxury hotels, always on the move, haunted, pursued by his own nightmares. There he is, a figure widely disparaged in his own country, widely disparaged even in his own political party, notwithstanding the fact that he was their most successful leader by far.

The reason for his peculiar fate is not at all hard to detect. He sought to shape the world anew, a world in his own image; a brave new world that had such people like him in it. He went to war, in Africa, in Europe, in Asia . Time and again he created desolation and called it peace and human rights; he created Afghanistan ; he created Iraq ; he created Kosovo.

It was once said that all political careers end in failure. But who would have thought that Blair’s many failures would become so obvious and so quickly; who would have believed that the mirages he created would turn out to be dust. Look at the demons he associates with or conjured up. There is Paul Kagame, president of Rwanda , whom he described as a “visionary” and a “good friend”. This ‘visionary’ and ‘friend’ stands at the head of an army that has now been accused of committing a series of gross atrocities in the neighbouring Democratic Republic of Congo, atrocities against Hutus in everyway as bad as those committed against the Tutsis in the infamous genocide of 1994.

That’s one of Blair’s chums. To this magic circle one can add Victor Dahdaleh, the Jordanian-born tycoon involved in bribery allegations; there is Thaksin Shinawatra the former prime minister of Thailand, another billionaire and corrupt wheeler-dealer; there is Mummar Gaddafi, the Libyan dictator and all round oddball for whom Blair acts as an advisor, a cosy relationship that had nothing whatsoever to do with oil deals. There are murderous tyrants and shady businessmen in the entourage of Cosmopolitan Man…and there is Hashim Thaçi, prime minister of Kosovo and alleged farmer of human organs.

Last summer Blair recalled a military adventure, using a refrain with which we are all so familiar: “I did what was right. I did what was just. I did not regret it then. I do not regret it now.” He was not speaking of Iraq ; he was speaking of Kosovo. This twilight state and criminal empire is now led Thaçi, another of the Blair set, who, when he was a leader in the Kosovo Liberation Army, was known as The Snake, which might give you some clue as to his character.

In a recent Council of Europe report he stands accused of heading a mafia-like criminal network linked to organ trafficking. He stands accused of smuggling Serb captives into northern Albania where they were butchered, their kidneys removed for sale on the black market. The prisoners are said to have begged not to be ‘chopped to pieces’ before they were shot. The worst thing about this is that Western governments seem to have known of Thaçi’s actions before military intervention in the Kosovo War. Kidneys and narcotics, these were the trades favoured by this war criminal, Blair’s best friend.

I really hope that Cosmopolitan Man is seen perpetually in the half-light, wandering from one ghastly airport lounge to another, verily unto the trump of doom.
Posted by Anastasia F-B at 01:22