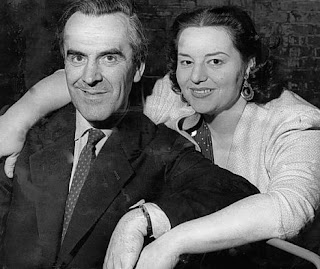 I take pleasure in new discoveries, of books, of movies, of places, of ideas and of people. Thanks to a fellow blogger called Glen, who, amongst other things, writes about individuals and events associated with Kent, his home county (Kent Today & Yesterday), I became aware of Hattie, a biopic about the late Hattie Jacques, a British comedy actress, broadcast earlier this month by the BBC.

I confess the name meant nothing to me, though in fact I recognised her from watching occasional appearances in episodes of Hancock’s Half Hour, a classic comedy show which I bought on DVD last summer with the intention of reviewing. In contrast I remembered John Le Mesurier, her husband and fellow actor, quite clearly from television repeats of an old sitcom called Dad’s Army, focusing on the comic antics of a Home Guard unit during the Second World War. In this he played Sergeant Wilson, a rather louche, languid sort of chap, obviously public school, a sharp and amusing counter-point to Captain Mainwaring, the pompous and pretentious lower-middle class commander, so obviously discomforted by his subordinate’s effortless social superiority.

I finally managed to see Hattie on BBC iPlayer, followed by a brief spot of research on Jacques herself. A fat, matronly sort of figure, she clearly played up to this, making her name in a long run of British comedy films with the title of Carry On this, that or the other. I mean no disrespect when I say that these movies are prime examples of British working class humour, lots of double entendres and sexual references of a sort of naughty seaside postcard variety, the kind of thing that does not, I imagine, travel all that well. 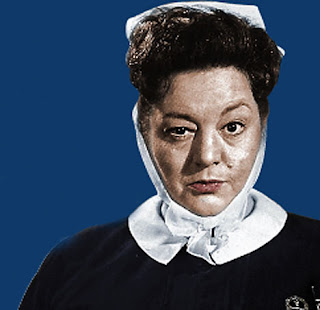 Hattie, which I take to be a true account of part of the actress’ life, focused principally on a love affair she had with one John Schofield, such a contrast in every way with Le Mesurier, lower class and roughly spoken, not at all the gentleman.

Now, I should say that I’m not easily discomforted when it comes to matters concerning sexual relationships. I’m tolerant of others and I’m adventurous myself. Having said that, I found the relationship between the three people depicted in the drama risible and oddly bizarre. If I say that Schofield, by his own demand, moved in to the master bedroom with Hattie in her own home, while Le Mesurier was shuffled off to the attic, all while their two young sons were living under the same roof, you may have some idea why I felt like this.

She wanted John to stay; he did not want to go; he did not want to damage her career by the scandal of a divorce. But, my goodness, surely the persona of the unflustered gentleman can be pushed too far? What kind of man, I have to ask, would tolerate such a situation in his own home; what kind of woman would find such an arrangement tolerable? Am I being naïve; are there people like this; is there some kind of vicarious sexual pleasure in humiliation? I felt both sorry for Le Mesurier, for his discomfiture, and angry, for his lack of assertiveness, at one and the same time.

In the end, for all the sexual novelty, the whole silly ménage a trios was just so chintz curtains, furry lavatory seats and mock-Tudor suburbia, all so vulgar and petty-bourgeois, a farcical and comic slice of real life that might very well have served as a script for a Carry On movie.
Posted by Anastasia F-B at 15:51