We cheer for an Eton crew 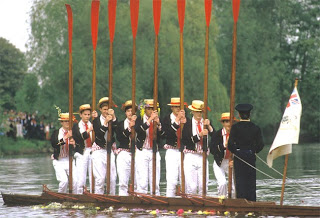 It was father’s birthday yesterday, his fiftieth, a significant milestone, so he says. We had a gathering at a place we have in Surrey, an old sprawling farmhouse that once belonged to my grandparents, enough room for my parents set, and enough room for some of my own set! It’s a lovely location, right in the heart of the county, with Annette, my horse, liveried in nearby stables.

Some of father’s friends from his Eton days were there, people with whom he has kept close contact over the years. He used to tell me that the friendships made at school are often the most lasting and the most meaningful in life, something I dismissed at the time; something I dismiss no longer. It would be depressing to think that schooldays are the best days and all the rest is anti-climax; but they are some of the best days.

I would have gone to Eton if I had been a boy, as father did and as his father did. I once talked to my grandfather about a certain Eric Blair, one of the more distinguished scholars, though he was singularly unimpressed by any Eton man who embraced left-wing politics, not just that but one who subsequently abandoned his post in the Imperial Police! I have to say I’m rather glad he did.

The Eton song is Carmen Etonense, always sung in Latin, though most people wrongly assume that it’s the Boating Song. Since the latter is favoured by my father and was favoured by my grandfather I offer it here as a birthday tribute and as a memorial.