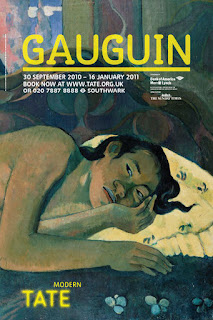 The Tate Modern London is holding an exhibition of the work of Paul Gauguin at the moment, scheduled to run until mid-January. It’s quite an occasion, the first major showing of his art in the city for more than half a century. Despite other demands on my time I simply had to go, spending several hours last Saturday looking at the development of his style, being taken to places as far apart as Brittany and Tahiti.

Gauguin fascinates me both as a painter and as a man, though quite frankly parts of his life, aspects of his conduct, his moral turpitude, I have to say, does not reward close scrutiny. The man and the monster in the man have attracted me ever since I read The Moon and Sixpence, the short novel by William Somerset Maugham loosely based on the artist’s life, though his fictitious Charles Strickland is not nearly quite as callous as the real-life Paul Gauguin!

Sorry: perhaps I’m putting you off; that’s certainly not my intention. It’s easy to forget the man in discovering the artist, and what a discovery he is, as you will find if you visit Gauguin: Maker of Myth. He began working in the Impressionist style but quickly rejected what he thought of as the tyranny of mere appearance. I so agree with this; art for me is a search for deeper things, deeper meanings: in colour, in subject, in object, in imagination. The endless water lilies of Claude Monet bore me absolutely rigid! 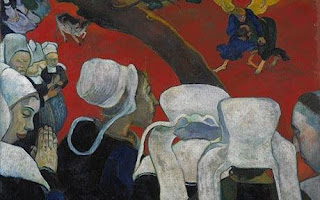 Gauguin, in contrast, created something altogether more solid, less ethereal, in what was later to be called Post-Impressionism, really the true beginnings of modern art, impacting on people like Cezanne and Picasso. There are so many striking paintings here, paintings from his Breton period, which includes Vision of a Sermon (Jacob Wrestling with the Angel), where women in traditional costume are seen watching the struggle between the two central figures. And I have to make special mention of The Ham, a still life painted in 1889, a painting that does not call for one’s attention, no, it simply demands it!

Gauguin went to Brittany is search of an illusion; he was to continue to pursue the same illusion all the way to the South Pacific: the belief that in the midst of modern sophistication there was a purer, simpler more authentic, more primitive way of life. Primitivism in life, primitivism in art was his quest, attained in the latter, eluded in the former. 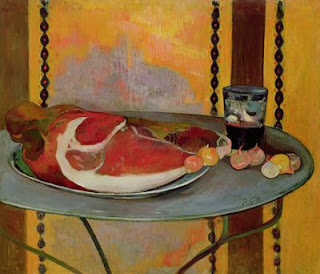 The Tahiti paintings, brilliant as they are, brilliant in structure, colour and tone, are really nothing more than a threadbare colonial fantasy. Look hard; this is no paradise; look how detached and sullen his women are, self-absorbed, cut off from the outside world. The paintings tell a deeper story of alienation and demoralisation that the artist is too honest to have missed. In The Spectator supplement on the exhibition Martin Gayford writes that there are moments when Gauguin in his last years brings to mind Conrad’s Heart of Darkness, a novella that depicts the central character’s moral collapse in a tropical colony, though his destiny was squalid rather than horrific.

No matter; it’s possible to enjoy this exhibition without looking for anything deeper than the art itself. It’s unlikely London will ever again see such a comprehensive collection of one of the great masters of modern art, one of the few people to show that there truly are new ways of seeing. 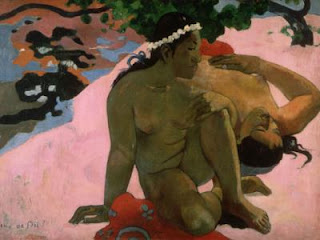 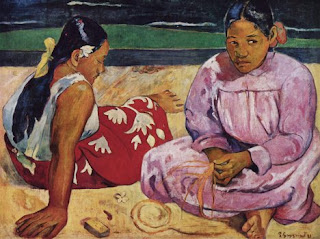