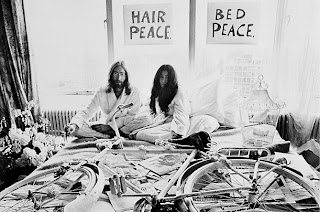 There was an article in last week’s Spectator by Michael Henderson (Imagine There’s no Lennon), written to mark what would have been the singer-songwriter’s seventieth birthday but for his assassination in New York in December 1980.

I can recognise the significance of The Beatles as a band and the importance of Lennon’s collaboration with Paul McCartney in the composition of some memorable tunes, though I never really warmed to their music, the music and the preoccupations of my parent’s generation. That doesn’t really matter; as light entertainers they were incomparable. The trouble is they, particularly Lennon, began to see themselves as something more; as the voice of a generation, as the avatars of the age, as the conscience of the world. In this they became both laughable and ridiculous, an example for people even more deluded and conceited than themselves.

In 1972 Paul McCartney, now post-Beatles and performing with Wings, his own band, produced a song called Give Ireland back to the Irish, a comment on the political troubles of the day in Northern Ireland, in which he had clearly cast Britain in the part of the ‘imperial’ aggressor. It was banned by the BBC for political reasons though, as Dominic Sandbrook says in State of Emergency, they might have done better to suppress it for crimes against musical taste. “Great Britain you are tremendous”, McCartney witters on “”And nobody knows it but me, but really what are you doing in the land across the sea.” Protecting the Unionist majority against the atrocities of the Provisional IRA, is the simple answer, though clearly too complicated for McCartney.

And then there is Lennon, bad to begin with, even worse after the absurd Yoko Ono, that talentless self-promoter, took hold of him. Now the hectoring and the shouting began, in such ‘masterpieces’ as Give Peace a Chance and Woman is the Nigger of the World. But the worst piece of messiah-speak has to be Imagine. I’ve written about this dreadful ditty before, a piece in which I concluded;

On a wider point for me Lennon the message, as opposed to Lennon the medium, is all wrong. When I was in my teens his song Imagine came top in a list of the hundred greatest pop songs. I hate it, I absolutely hate it; I hate the lazy, utopian sentiments behind it, this Communist Manifesto turned into a lullaby. I don’t need to imagine what Lennon-world would be like; I saw traces of its aftermath in a land scarred forever by Year Zero and the ‘brotherhood of man.’ No hell below us; just hell on earth.

Henderson stresses that while Lennon cannot be blamed for every banality spewed out by the likes of Bono or Richard Gere (he forgot to mention Saint Bob Geldorf), the moral infantilism and the obsession with public virtue unleavened by private examination is a process that he began. I fully agree that, as a political figurehead, or symbol of rebellion, John Lennon was a poor joke, a ‘working class hero’ who could lecture the world about peace from the comfort of a bed in the Amsterdam Hilton. No wonder they wanted to crucify you, John; I would.

As a postscript, Henderson’s article was followed up this week by a reader’s letter;

Further to Michael Henderson’s excellent article about sanctimonious pop stars…I remembered that story about Bono saying at a concert that ‘Every time I clap, a child dies in Africa.’ A member of the audience shouted: ‘Well, stop f***ing clapping then!’

It’s time these clots were put back in their place. Let’s have no more tiresome twaddle.
Posted by Anastasia F-B at 16:17