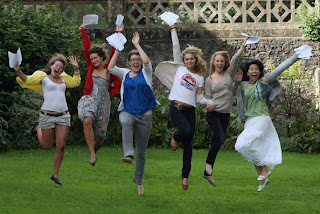 What follows is an article I wrote for a multi-author blog site shortly before this year’s A-level results were published. I’m adding it here for timxwalker2, whose comment today on my Larkin blog (Going down the long slide) touched on declining standards in education, on the forms of academic inflation that have affected our educational system for years. It’s polemical, deliberately so (it was the nature of the site!), but I stand by the essential point: education is the pursuit of excellence, not bogus and harmful notions of social equality.

It’s as predictable as the first cuckoo of spring. For years the publication of A-level results has been followed by lamentations over declining standards. So, let’s do something about it, let’s set the bar even higher, awarding particular merit to the best candidates, those achieving the best possible marks; let’s have a new A* grade. Well, now we have. The first results will be published soon. And what happens? Why, new lamentations, predictions that the independent schools will soar ahead of the state sector, fears about increasing social inequality.

The Observer gave this front page coverage on Sunday, reporting that privately educated pupils are expected to get three times as many of the A* grades at A-level than those in state schools. This means, of course, that the independents will be even more heavily represented in universities, raising concerns about ‘fairness’ and ‘social balance’ in institutions of higher learning.

Some universities are concerned enough by these wholly irrelevant pressures that they have decided not to use the A* this year. Cambridge, I’m delighted to say, will use them, but Oxford will not. Given the political intimidation universities have been subject to in the past, particularly in the illiterate New Labour years, I suppose there is really no great surprise in this.

If there is a wide gulf between fee-paying schools and the state sector that’s because much of the state sector is rubbish (do please note I wrote much). It really is time that we faced up to the simple fact that many comprehensives, particularly in the larger cities, are only good for producing oiks, chavs and gangstas in large numbers. Is there any surprise that Diane Abbott sought a way out for her own son? She did what any decent parent would do: she wanted the best, afraid of the worst. The crime of this hypocrite is that she would condemn everyone else to the worst.

I attended a very good boarding school. Yes, a lot of us came from privileged or very privileged backgrounds, apart from the girls, some of the brightest in my cohort, who were there thanks to the former Tory government’s Assisted Places Scheme. Again, yes, a lot of us were highly motivated, which serves to ease the teaching process. Even so, my group was as mixed as any, some bright, others less so, still others positively dense. But the emphasis was on discipline and teaching, focused in the most effective way possible. There was none of the trendiness, drift, uncertainty and poor morale that are such steady features of the bog standard comprehensive.

So, should we be concerned that most university places are taken up by people from the independent sector? In my view, no, not if we really do want the best. I honestly could not care less about ‘reducing inequality.’ For thirteen years Labour tried to ‘reduce inequality’ with miserable results. Damian Hinds, a Tory member of the education select committee, quite rightly said that it’s not a question of money; it’s a question of learning from those who do it best. And it’s the private sector, the independents, the public schools that do it best. They always have; they always will.