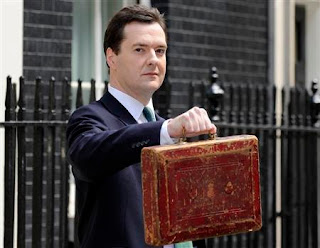 Imagine yourself lost, somewhere in rural England. You are on your way to London; your sat nav has broken down, and you are on a minor road without signs. The only way of getting back on course is to stop and ask one of the passing locals. A man approaches on a bike; you wind down your window. "London", he repeats, with a thoughtful expression on his face, "Sorry, you won't get to it from here."

This came to mind as I reflected on the panicked reactions in the aftermath of last week's spending review, in which George Osborne, the Chancellor of the Exchequer, announced £81billion in cuts in government spending. It was a bold move, an absolutely necessary move to deal with the massive hole in the public finances left by the fiscal irresponsibility of the previous administration, so bad it comes close, at least in my estimation, to being criminal.

Cuts are necessary; most people agree on that; even the Labour opposition agrees on that...at least I think they do. Alan Johnson, the Shadow Chancellor, better known to his many friends, including me, as Postman Pat, is a little bit lost when it comes to economic matters, rather a liability, given his brief. Cuts are necessary, just not now; it's not the right time. But as Norman Lamont, a former Chancellor, says in today's Sunday Telegraph, now is never the right time.

I'm a Tory, a particularly proud admission. I come from a family with a deep tradition in the Conservative Party. I wobbled slightly in my mid-teens, when, much to mother and father's horror, I formed an attachment to a chap with links to the Socialist Worker's Party or some such organisation; but that lasted all of about three weeks before the pendulum swung back to its natural stasis! I don't think I've ever been prouder to call myself a Tory than now, don't think I've ever been prouder of a politician than I am of George Osborne, whom I believe is the coming man, the man to watch, the man of the future. My admiration for our present Coalition between the Tories and the Liberal Democrats has also increased tremendously, set to become one of the most politically significant marriages in British history.

It was not always thus. I was disappointed and angered by the outcome of the General Election earlier this year, which saw the Conservatives emerge as the strongest party but still short of an overall majority, and that after the worst (no qualifications here; not one of the worst) administration in British history. I was convinced that the emerging coalition, the deal between David Cameron, the Conservative leader and now Prime Minister, and Nick Clegg, leader of the Liberal Democrats and now Deputy Prime Minister, had a limited life; that there was bound to be another election within a year. I no longer believe this to be so; I think the coalition will last for the duration of the Parliament. The marvellous thing is that it's not weak, not tied by shifty and evasive compromises. No, the spending review has shown that it is willing to accept the tough decisions, willing to accept temporary unpopularity in pursuit of the greater good.

But the driving force is George Osborne; he is the one to recognise how necessary this fiscal realism is before this country sank altogether in the rising floods of debt. The overgrown state, nurtured by Labour, will be tackled at source in a major cutback which will see the loss of some half a million jobs in four years. Foul, cry the unions, foul cry their bloated communist bosses: this is unfair, an attack on 'working' people. Oh but how mild it is compared to Cuba, a country they so admire, that is proposing to cut half a million state-sector jobs in six months, and that only as a first stage. That's the way to do it, comrades.

Yes, here is where we are, but how gentle, how realistic the Osborne cuts are. It's as well to remember that £81billion is a mere two years of interest payments on our current levels of debt. Postman Pat predicts disaster, the dreaded 'double dip' recession, but the Osborne squeeze will only reduce public spending from 48% of Gross Domestic Product (GDP) to 41% by 2014-15, still above the post-war average for this country. Spending, in other words, will fall to the same proportion of GDP as in 2007-8, the point when Mad Gordon Brown, then Chancellor, set out to prove that the economy was not based on boom and bust but bust and bust. Despite all of the dire warnings from the ghastly official opposition, at the the end of the of Osborne's four year cycle the government will still be spending more in real terms than when Labour came to power in 1997.

Yes, Osborne is my hero. I will only venture one small criticism. The tough decisions have been taken; the Guardian state will be pruned right back, the state where the most fatuous and unnecessary 'jobs n services' were created, a forest canopy that choked the life out of the real economy, the productive economy. Killing sacred cows, that's what Tories do best, not being in thrall to some past practice or favoured idea. Taking tough decisions inevitably means courting unpopularity. But some shibboleths still remain. The pledge to protect the National Health Service from cuts, made during the election, has been maintained. This, I believe, is a gross error for the reason that the NHS budget grew extravagantly under the previous administration, that it is an enormous waste of national resources at a time when we cannot afford such waste. This monster now accounts for a fifth of government spending, riper for cuts than any other government department. The same goes for special concessions to the elderly, who will continue to be given certain financial privileges, like free bus passes, whether they need them or not. Such provision, like the welfare budget in general, should be rigorously means tested. As The Economist quite rightly says, under the previous administration the state became more of a comfort blanket than a safety net.

I'm continually tempted to say that this government is rapidly shaping up to be one of the best Tory administrations in post-war history, perhaps even the best, better even than that of Margaret Thatcher, and that’s saying something! But it's not a Tory administration, it's a coalition. I think we are being protected to some degree, protected from the full truth about the public finances. How else does one explain the Liberal Democrat adherence to a policy of financial realism that goes against the happy-clappy politics they have pursued hitherto?

This is the road we have to take. These cuts, I believe, are only the beginning, an absolutely necessary way of ending the dreadful lie that prosperity can be built by borrowing and credit; it can't. As Lamont says, prosperity, real prosperity, has to be earned, not borrowed. Yes, there is a gamble here, but a necessary gamble. It's to be hoped that the British people, in a deeply rooted entrepreneurial spirit, will rise to the challenge, not descend into mass hysteria, like the French, or murderous mass hysteria, like the Greeks. Coming from nowhere, never before having held senior public office, George Osborne is shaping up as a great politician and a great Chancellor. Yes, I'm proud to be a Tory.
Posted by Anastasia F-B at 15:39