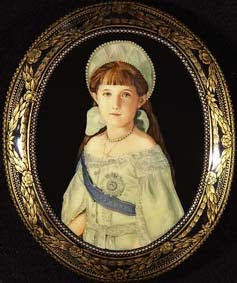 I often get asked about my name, my Christian name (I, at lest, still use that expression!). Am I Russian, have I some Russian influence in my background, am I named after the Grand Duchess Anastasia Romanov? It's a measure, I suppose, of how unusual this name still is in England. Let me tell you how unusual. When the movie Anastasia was released, a movie I still love, I was asked by my classmates if it was about me! It's an illusion that my parents did nothing to dispel. The truth, as always, is wholly mundane. My grandmother, my mother's mother, was also Anastasia, though I have no idea why.

Still the association with the tragic Grand Duchess has always fascinated me. She was the youngest of the last Tsar's four daughters, who referred to themselves collectively as OTMA, Olga, Tatiana, Maria and Anastasia. I'm not quite sure why but Anastasia, possibly because she was the youngest daughter, the youngest of the Romanov children until her brother Alexi was born in August 1904, has attracted a particular romance, something that the Disney corporation, amongst others, exploited. The popular rumour was that she survived the massacre of her family by the communists in 1918, a rumour that allowed various pretenders to arise, the most notable of whom is one Anna Anderson. It's all rubbish of course; Anastasia, Saint Anastasia in the Orthodox Church, died with her parents, her sisters and her brother.

There is one small and competently unimportant coincidence, a connection between the Grand Duchess and myself, something that overwhelmed me when I discovered what it was. When I set up this blog in April of last year I decided to call it Ana the Imp. Ana is simple enough, just an abbreviation of my name. An imp is a mischievous little devil, which suited my character, so Ana the Imp it was. It was when I decided to write an article on the Grand Duchess that I discovered in my researches that her nickname within the family was Shvibzak. The thing is, you see, Shvibzak is the Russian word for imp.

Labels: ana the imp, the Romanovs