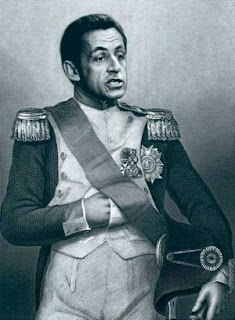 The president of France, now there is a man: there is Nicolas Sarkozy, an individual for whom I don't have a huge amount of respect. I've written about him in the past in scathingly sardonic terms, drawing attention to his vanity, his absurdity, his lies and his relentless self-promotion, the self-promotion of an insecure, little (little being the operative word) man. I'm normally sympathetic to right-wing politicians, apart from the laughably priapic Silvio Berlusconi and, up until now, Nicolas Sarkozy, the pocket pocket Napoleon. But things change, things always change.

He is a beleaguered man, President Sarkozy, under attack from the Eorocrats and under attack from the sans culottes in his own country. He's taken a stand against the Roma of Romania, professional and unpleasant beggars he's sent back east in hordes contrary to diktats on free movement within the European Community. Once again I put my head in the noose. If I were President of France I would have done the same. If I was Prime Minister of England I would do the same. Why? Is it because I'm a racist; is it because I'm opposed to the free movement of productive labour; is it because I dislike gypsies? No, no, and once again, no. I simply dislike the free movement of professional beggars; I dislike the streets of London being filled with Eastern European gangs of the indigent.

Now the President has taken a more important stand; he has taken a stand against the complacency of his own nation. In present economic circumstances he has asked it to make a few sacrifices for the sake of France; he has asked the 'workers' to consider the possibility that it might be necessary to raise the retirement age to 70, no, to 65, no, to 62, yes, and that's why the are now rising in their thousands in protest.

Yes, that's not a mistake - he wants to people to work until they are sixty-two. How dreadful; time for a new Bastille to tumble. The sans culottes are out in the streets, the people who enjoy bother for the sake of bother, the usual communist and anarchist suspects. At Nanterre just outside Paris thugs have attacked the police not because they believe in fairness, not because they give a fig about the retirement age (after all, what need to retire when you have never worked?); no, simply because they enjoy thuggery for the sake of thuggery, violence for the sale of violence.

I wish you well, Monsieur le Président, I wish you the courage to stand up and stand firm. But, alas, you are not Napoleon; you are not even De Gaulle: you are Sarkozy. I expect the capitulation soon. I would be delighted if you proved me wrong.
Posted by Anastasia F-B at 15:57