Thoughts of a Sawdust Caesar 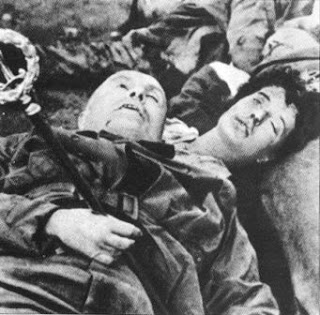 Claretta Petacci, Mussolini’s last mistress, murdered alongside him by communist partisans in 1945, has come back to life. Not only that but she is also causing something of a sensation. Extracts from the first volume of her diary are presently being published in Italy, with fresh revelations about her relationship with the dictator, revelations about him as a lover and as a man.

The document was seized by the police in 1950, who kept to a strict seventy year rule on restricting access. Even now the later part, covering the wartime years, will not be publishable for another five years. The diary’s apparently massive and obsessive in attention to detail. I’ve not seen anything of the original but Richard Bosworth, a specialist in modern Italian history, gives a decent synopsis in the current issue of the BBC History Magazine.

I have to say I’ve always felt sorry for Claretta. In herself she was totally inoffensive, and did nothing to deserve her death, or the subsequent desecration of her remains. Her only crime was to remain loyal to Mussolini, a lover almost thirty years her senior. She had to put up with a sexual performance that was not exactly fulfilling or tender, as well as the insecurities of a grumpy old man.

In her diary she records his opinions and his fuming, or his fuming opinions. I was amused by his view of the English, a bunch of pigs, so far as he was concerned, who only “thought with their bums.” How one thinks with one’s rear end I have not the least idea! His opinion here was clearly brought on by a personal sense of inferiority, some slight, perhaps, from those who “…detest anyone who rises from the ranks and imposes himself, anyone exceptional.” Seemingly our only great man was Disraeli, and he was an Italian, as well as being the lover of Queen Victoria!

His opinion of the Spanish was not much better, an indolent race contaminated with Arab blood. He describes Francisco Franco as “an idiot”, though in every way he was a far shrewder man than Il Duce. The French were even worse, infected with syphilis and cursed with a free press. Their only great man was Napoleon and – guess what? – he was an Italian!

After the war the novelist Alberto Moravia, no friend of the Fascists, said of Mussolini that he was not a bad man and that “…if he had a foreign policy as clever as his domestic one, me might still be Duce today.” Yes, he might have lasted if he had been a little more “idiotic”, a little more like Franco. His moves in foreign policy were unbelievably stupid, turning from a blustering bully in his early days to Hitler’s hyena in the later.

There were rare points where he could behave with courage and determination, and here I’m thinking specifically of his actions in 1934 to forestall any German moves against Austria after the murder of Engelbert Dollfuss, the chancellor and a personal ally. But he threw it all away in 1938 by agreeing to the Anschluss, thus overturning, as Bosworth says, Italy’s strategic victory in the First World War.

Claretta records details of his relationship with Hitler, observations which seem to me to emphasise just how delusional Mussolini was. More than that, there are all sorts of rationalisations about anti-Semitic policies adopted under the German example, points where he becomes clownish in an artificial racism that had never previously been part of his character or his outlook.

I think it worth emphasising here that until the late 1930s anti-Semitism was never part of Fascist ideology. Among Mussolini’s previous lovers was Margherita Sarfatti, a Jewish intellectual who had aided him in the early days of the regime. In retrospect, in the light of the new anti-Jewish policy, he tells Claretta that he was repelled by Sarfatti’s body odour, and that she was responsible for one of the only three times in his life when he failed to get an erection!

His overwrought anti-Semitic protests and rationalisations go on and on. Beethoven, whom he once described as his favourite composer, is now absurdly dismissed as “Jewish.” On Easter Monday 1938 Claretta records him as saying that “these pigs of Jews are a people who must be cut to pieces”, that they are natural traitors, “Puah! I detest them.” It’s all so much wind, of course. Looking at this with an eye of an amateur psychologist, it seems to me to proceed from for a deeper sense of unease. Hitler did not talk like this, and Mussolini did not act like Hitler. Even in the worst days of the war Jews were safer in zones controlled by the Italians than almost anywhere else.

The diary confirms so many of the dictator’s insecurities. He was forever fretting over how he would be judged by history, fearing, like his mother and father he, too, would die while still relatively young, fearing for the loyalty of Claretta, who, given the difference in their ages, must eventually “betray” him.

But she did not. Instead she continued to act as his muse, recording even his impotent outbursts against his own family, including a particularly revealing one in the spring of 1938: “I am not a dictator. I am a slave. I’m not even master in my own house…I am stuffed with it all, stuffed by this whole old world. I need a new world that I can make.” Clearly he had ceased to recognise that this was the new world that he had made! There are some things, obviously, that even supermen cannot do.

The Munich Conference, which decided the fate of Czechoslovakia, was Mussolini’s ‘finest hour’, as he liked to pride himself, another measure of the depth of his self-deception. He thought himself the man of the moment, the man who had avoided war, whereas in truth he only had a bit part in a drama scripted by Hitler. A wiser man, a shrewder man, would have been sobered by the aftermath. Mussolini was neither wise nor shrewd.

Thereafter his bluster, his threats against the Jews, his declaration that “I’ll make a massacre just like the Turks did”, were also accompanied by outbursts against Catholicism, a religion that was “dying”, and the French – “completely finished, simply nauseating as a people.” Even his fellow Italians did not escape. Four million of them were contaminated with ‘bad blood’: he “would destroy them all, exterminate them.”

Bosworth asks – unnecessarily, in my estimation- if such statements can be taken as evidence that Mussolini intended to move in a more radical direction, before tentatively dismissing such an idea. It seems obvious to me that are no more than the empty posturing of a frustrated an insecure man, growing ever older, ever less relevant by the day. Claretta, in her loyalty, has ironically never done more to make her lover look like the Sawdust Caesar, and the unhappy man, he truly was.
Posted by Anastasia F-B at 16:02