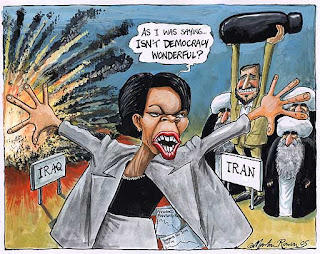 The BBC recently screened Secret Iraq, a two part documentary on the 2003 invasion of Iraq and the appalling aftermath. It was excellent, a standard of television journalism that the corporation often attempts to reach for but just as often fails to grasp. It covered the story from so many angles, some I was not fully aware of, even interviewing former insurgents and tribal chiefs.

If you were under the impression that it was General Petraeus and his vaunted surge that defeated al-Qaeda in Iraq forget it: it was the Iraqi people themselves. It was the Coalition, the political, tactical and strategic stupidity of George Bush and Tony Blair that was responsible for letting this monster out of the bottle in the first place.

In watching Secret Iraq I was reminded of a passage in Tacitus’ Agricola, the part where he puts defiance in the mouth of Calgacus, the tribal chief preparing his troops to meet the onward advance of the Roman army. You may recall it yourself;

But there are no tribes beyond us, nothing indeed but waves and rocks, and the yet more terrible Romans, from whose oppression escape is vainly sought by obedience and submission. Robbers of the world, having by their universal plunder exhausted the land, they rifle the deep. If the enemy be rich, they are rapacious; if he be poor, they lust for dominion; neither the east nor the west has been able to satisfy them. Alone among men they covet with equal eagerness poverty and riches. To robbery, slaughter, plunder, they give the lying name of empire; they make a desolation and call it peace.

Well, that’s exactly what the Coalition did in Iraq; they made a desolation and called it…I don’t know what they called it: freedom, democracy, were words that floated around, saying freedom where there is no freedom, democracy where there is no democracy, only terror of the worst kind, terror and murder. Tacitus is called to mind, so to is Shelly; for anyone watching this documentary truly did meet murder on the way.

I try to be objective about these events, about the death of Iraq; I try to bring all of my detachment and scholarly instincts to bear, with limited success, I freely confess. Yes, Saddam was a bad man, a monster; it would be deeply disingenuous to deny the point. But he was not Stalin, not Hitler; he wasn’t even Mussolini. He was just another petty Arab tyrant. Still, he served a purpose. In terms of simple realpolitik he brought stability to an unstable land. More than that, he was an effective counter to the regional ambitions of Iran, which has increased immeasurably in power since the invasion, a helpful by-product of the Bush-Blair Axis.

After the First World War, when the state of Iraq was in the process of formation, Gertrude Bell, a specialist in Arab affairs, in some ways a kind of female Lawrence of Arabia, gave a highly prescient warning of what would happen if the Western powers failed to pay proper attention to the region;

If Mesopotamia [Iraq] goes, Persia [Iran] goes inevitably…And the place which we leave empty will be occupied by seven devils a good deal worse than any which existed before we came.

The only criticism I have here is that she underestimated the number of devils. I’m sure Bush must have taken advice from historians and other specialists familiar with Iraqi culture, politics and history (surely he must?) I certainly know that Blair was briefed by a panel of experts, people who pointed out the sensitive political and religious balance in the country that might be seriously upset in the wake of invasion. Yes, he came, he listened…and he ignored them. Saddam was a ‘bad man’; that’s all that mattered.

In time the history of the Iraq Affair will be written, hopefully at a point when all passions are dead. I’m not the person to do this for I simply can’t think of an episode in all of military and political history as bad as the invasion of Iraq. The simple fact is the Coalition went into the country in shock and awe without any thought over what was to come. Destruction was the easy part; construction ever more elusive. It’s the simple-minded stupidity of Blair and Bush that infuriates me most: the people of Iraq hated Saddam so they would inevitably be grateful to us, even though we left them without power or water, in living conditions that were barely tolerable.

And then came Paul Bremer- remember him? – like a Roman proconsul, George Bush’s Pontius Pilate, a man with even less wit and sense than his emperor. He dismissed the Iraqi army; he dissolved the Ba’ath party, forces that might have provided some kind of workable framework for security and administration. It was a process of ‘de-Nazification’; the Ba’ath had to go, though in practice it was made up not of dedicated ideologues but people simply trying to advance their careers. And what came in their place? Nothing, that’s what, or rather an insurgency by the less than grateful, an insurgency which the President urged to be ‘brought on’, an insurgency that was to cost the lives of so many American and British soldiers. 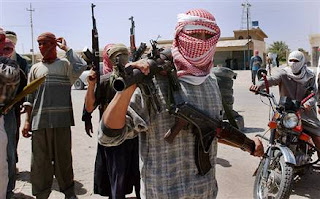 It wasn’t just an insurgency, a rising by people who found the presence of coalition troops in their country intolerable. No, there was also a serious outbreak of sectarian violence between the Sunni minority and the Shia majority, a process which reduced the country steadily into a state of chaos, civil war, in all but name, a process that is estimated to have cost thousands of lives. It was during this time that al-Qaeda gained a foothold, foreigners invited to provide help and support to the Sunni community in and around Baghdad, people being murdered by a Shia-dominated police service, helpfully recruited under the auspices of the Coalition.

It was all a vast conspiracy, of course: the insurgency was being controlled by a ‘mastermind’, and that mastermind had to be Saddam, still in hiding. He was captured, a dishevelled, sad old man. Bremer rejoiced; the worst was over. The worst was just beginning. As one of the tribal chiefs interviewed said the insurgency had nothing to do with Saddam, and everything to do with the things the allies least expected – anger, pride and a complete lack of gratitude.

In the end Petraeus was only able to defeat al-Qaeda because the local people turned against them, sickened by their atrocities. American forces were supplemented by Iraqi auxiliary forces two-hundred thousand strong. But at least the Americans could pretend to a victory unlike the British in Basra, soldiers who were given an impossible task with ever diminishing resources, also the responsibility of Blair and Gordon Brown, his chancellor. There can be no mistake about this: the British retreat from Basra, in which control was handed over to murderous Shia militias, was a defeat, one of the worst in our history, almost as bad as the surrender of Singapore to the Japanese in 1942. What followed for the people, especially the women, was a kind of hell, executions on a whim, atrocities on a notion. The fear was only lifted after Iraqi and American forces came down from the north.

Now, coming to the end, coming to the present day, the point was made that there is little hope and much fear in Iraq. A woman was asked what she thought of the country’s future. She shook her head for a long time, saying nothing. Looking thoughtful, she then said it’s hard to answer, very hard, because she has been living the bitterness of Iraq, that she has drunk the bitterness of Iraq, before, once again, lapsing back into silence, a deeply anguished expression on her face. A hundred thousand deaths later we made desolation...and we called it peace.