Fear and Loathing in Berlin 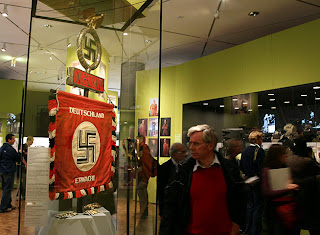 Amongst other things (always, always there are other things!) I’m reading Utopia or Auschwitz: Germany’s 1968 Generation and the Holocaust by Hans Kundnani. I don’t want to say too much about it at the present, as I have it in mind to write an article on the legacy in Germany of the Baader Meinhof terrorist faction, born of profound ignorance, born of an ignorance of history. This was to produce some grotesque inversions, a type of poisonous relativism. It came to mind when I discovered that the Berlin Historical Museum has just opened and exhibition about Hitler, the first since 1945 to break a taboo subject.

I say it’s about Hitler but it isn’t really, at least not Hitler in isolation. There are still some taboos, you see, to be overcome. So, no Hitler; instead the ponderous and didactic Hitler and the Germans: the National Community and Violence. The museum authorities seem to have approached the subject with quite a high degree of caution, fearful that it might attract the Neo-Nazi fringe.

Because of this nothing directly connected with Hitler personally has been allowed, just a lot of Nazi-era brick-a-brack: uniforms, beer mugs with swastikas, cigar boxes, banners, posters and so on and on and on. No recordings of Hitler speeches because that would be well, too Hitler, and the busts have been placed in such a way that won’t allow people to pose beside them for photographs!

I was inclined to dismiss this as a rather futile display of Nazi kitsch but with all of the qualifications, all the ands and ifs and buts, it is intended to make a serious point. For too long the Germans failed to engage with their past, either because of a sense of shame or because of a convenient collective amnesia, fertile ground for the hysterical delusions of the 68ers.

The museum is attempting to show, in as wide a context as possible, how the nation was seduced by Hitler and what impact this had. In a country where the swastika is still banned history is being allowed to come back to life and at least to some extent speak for itself. Those who cannot remember the past are condemned to repeat it, George Santayana wrote. An important step has been taken in remembering the past.

In writing this I was immediately reminded of a depiction of Hitler that is not likely to appear in Berlin or anywhere else in Germany, not in any immediate future that I can foresee. It happens to be my favourite image of a monster who, in the end, was no more than a man. It's called An Icon of Fear by the Italian artist Maurizio Cattelan. It caused a controversy when it was first exhibited because it seems to invite sympathy. At the risk of being misunderstood I have to say that it invited my sympathy, something I never thought I would feel for a man who destroyed so many futures and almost destroyed the civilization of Europe itself. But what sins he carries, what a terrible burden. I remember reading the words of a Jewish writer -unfortunately I can’t remember whom -, saying that he hoped that Hitler's tortured soul had at last found peace. When I look at An Icon of Fear, an image of the child as father of the man, an image of a penitent and frightened little boy, I can only echo these sentiments. 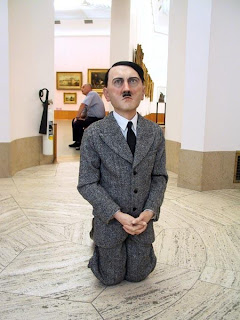