A cry in the night 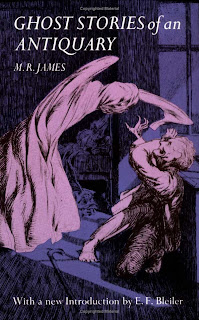 I acquired an early love of ghost stories, a point I’ve made here before. In mentioning the work of M. R. James a recent contributor reminded me just how much I love them, how much I love his work in particular. Montague Rhodes James, to give him his full name, was actually a specialist in medieval manuscripts and the provost of King’s College, Cambridge and then of Eton. But he is best remembered for his delicious tales of the supernatural.

I say ghost stories but he really crosses boundaries, touching on less spectral, far more tangible forms of horror. His tales touch on discoveries of things best hidden, of secrets that should never be told, of forces uncovered by antiquarians from which they recoil, unable to close that which has been opened; marvellous stories like Count Magnus, A Warning to the Curious, Lost Hearts, The Treasure of Abbot Thomas and Whistle and I’ll come to you; even writing the titles brings a tingle of remembrance!

I first came across them in an anthology that father has in his library, one of the books from his own Eton days. I delight in recalling the terrors in reading the stories by torchlight under my duvet after lights out, stopping at every creak and imagined noise! Sir John Betjeman, also a lover of these stories, had a similar early encounter;

In the year 1920 I was a new boy at the Dragon school, Oxford, then called Lynam's, of which the headmaster was C. C. Lynam, known as 'the Skipper'. He dressed and looked like an old Sea Salt, and in his gruff voice would tell us stories by firelight in the boys' room of an evening with all the lights out and his back to the fire. I remember he told the stories as having happened to himself.…they were the best stories I ever heard, and gave me an interest in old churches, and country houses, and Scandinavia that not even the mighty Hans Christian Andersen eclipsed.

Skipper was being wonderfully disingenuous because, as Betjeman later discovered, the stories he was claiming as his own reality were in fact the fictions of James. But I can’t think of a more delightful way of discovering them, adding a verisimilitude that must have amplified one’s sense of terror.

I’m older now; the childish fears have gone, the seduction of fear has gone, though the memory remains. I could never forget Count Magnus; never forget the terrible pursuit through time and distance of poor scholarly Mister Wraxall, who disturbed those who never should have been disturbed;

People still remember last year at Belchamp St Paul how a strange gentleman came one evening in August years back; and how the next morning but one he was found dead, and there was an inquest; and the jury that viewed the body fainted, seven of 'em did, and none of 'em wouldn't speak to what they see, and the verdict was visitation of God; and how the people as kep' the 'ouse moved out that same week, and went away from that part. But they do not, I think, know that any glimmer of light has ever been thrown, or could be thrown, on the mystery. It so happened that last year the little house came into my hands as part of a legacy. It had stood empty since 1863, and there seemed no prospect of letting it; so I had it pulled down, and the papers of which I have given you an abstract were found in a forgotten cupboard under the window in the best bedroom.
Posted by Anastasia F-B at 15:54