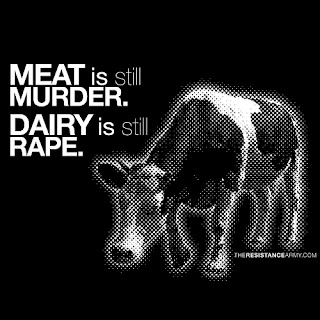 I have a confession to make: I’m a rapist; yes, I am. Perhaps you are as well? It’s easy to accept if you are a man but, as a woman, I find it hard to conceive of such a thing. It’s just that in my sexist way of looking at life I rather naively thought of rape as a uniquely male crime. But no, I’m a rapist. Why? That's simple: I eat meat.

Who says so, who levels this accusation? It comes from one Carol J. Adams, author of The Sexual Politics of Meat: A Feminist Vegetarian Critical Theory, a twentieth anniversary edition of which was recently published. I have a further confession: I’ve never heard of this woman or this book, though it says in an Amazon review that it’s a “vegetarian literature classic”, and if it says so on Amazon it must be true.

I, in contrast, thought it was a joke, really, I did, some kind of parody, an anti-feminist spoof, after I read a brief piece in Prospect by Digby Anderson (In the loopy). I went to Amazon in the first place to discover if it actually existed, not to look for reviews. I’m always casting my eyes over the wilder shores of weirdness, but this Adams woman is weird beyond weird. I begin to understand the mentality of people like her who are attracted to organisations like PETA, People for the Ethical Treatment of Animals, a sort of asylum for all the loopy-loos.

Oh, there is more than meat is rape, meat is murder, in her magnum opus, much more. Now I have to take Anderson’s word here, have to assume that he is not piling porky upon porky, because I’ve not the least intention of wasting money on a book that preaches that socialism, feminism, lesbianism and vegetarianism have an “elective affinity” for each other. Adams has apparently trawled through history finding feminists, easy enough to do, only to announce to the world that they were also lesbians, socialists and vegetarians, a bit like Adolf Hitler, then. Sorry; I’m being facetious - he wasn’t a socialist!

So, as Anderson reveals, in the Adam’s scheme of things, in her scheme of ‘critical theory’, to be a really pukka lesbian one also has to be a red-hot socialist, a militant feminist and an obsessive vegetarian, an all-round crank, in other words. “Eat rice, have faith in women”, the battle-cry emerges from the final page of The Sexual Politics of Meat: A feminist Vegetarian Critical Theory.

What a pity that trees had to be cut down to allow this rubbish to be published in the first place; what a pity even more have been sacrificed for the twentieth anniversary edition. I would say more but I’ve been gripped by an uncontrollable lust, an urge to rape a particularly bloody steak. I might even go so far as a spot of steak tartare, a measure of the depth of my depravity.
Posted by Anastasia F-B at 15:59