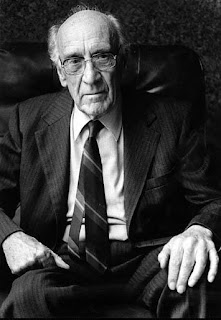 How many of you have a county, I wonder, bearing your family name? Well, I do – Fitzgerald County in the north-west corner of New South Wales. Honestly, it’s true! Actually, the county was specifically named in honour of Robert D. Fitzgerald, one of Australia’s most eminent Victorians, a surveyor by profession who established a dynasty of surveyors, as well as being a poet, a botanist and an ornithologist of some note, one who corresponded with Charles Darwin and published Australian Orchids, a classic in the field.

I mention this because in a recent email I alluded to his grandson, Robert D. Fitzgerald III OBE AM, a distant cousin of mother’s, one who made a significant contribution to the development of Australian poetry. She only ever met him once, when she and my grandparents went out to Australia in the 1960s to attend the wedding of his daughter Phyllida, though his expansive personality made a big impact on her, something she remembered years after. Sadly, I was never able to meet him as he died the year after I was born. Now, I think, is the time for me to say a little more about the Australian Fitzgeralds.

Robert D Fitzgerald, the patriarch, was born in Tralee, County Kerry in Ireland in 1830, emigrating to Australia in the mid-1850s after completing his education in what was later to become University College, Cork. As a surveyor he rose rapidly in the profession, though much of his energy, and a good bit of his free time, was devoted to watching birds and cultivating orchids at his home in Hunters Hill, a suburb of Sydney. His published work on orchids was widely acclaimed in the scientific community.

His son and grandson carried forward his name and his profession, though Robert D Fitzgerald III was to establish a reputation principally as a poet and man of letters. In A History of Australian Literature H. M. Green says of him;

The work of Robert David FitzGerald blows like a fresh wind across today, exhaling a courage and confident aspiration, a sense of wonder and mystery that are strange in a world which is bored and afraid and sorry for itself, and a poetry in which this attitude was intensified under the shadow of the early work of T S Eliot. Fitzgerald represents in fact a life and an interest in life that wars and depression have dammed back after the upwelling of the nineties; that upwelling had found its most characteristic expression in the ballad revival in Britain and the dominions, but FitzGerald's poems have none of the qualities of the ballad, Australian or other, except vigour and an adventurous spirit

He began publishing his poetry when he was still at Sydney Grammar school, writing under the nom de plume of Cruma-boo for the Sydnesian, the college magazine. It was the beginning of a lifetime’s dedication. For his poetic achievements he was awarded the Order of the British Empire (OBE) in 1951, later becoming a member of the Order of Australia (AM), the most distinguished of a number of other awards and honours. Though by now he was a grand old man of Australian letters he started out as a rebel, whose early associations had all been with the literary avant-garde, his poems published in a literary magazine called Vision. There is a wonderful pen portrait of him from the 1920s;

Impatience is his keynote, an impatience with flesh and bone, boisterously thumping his fist on the marble-topped tables of Mockbells [coffee shop], or the linoleum covering of a bar, while he insisted that Vision found a new school, the pre-Kiplingites, escape from the modern mathematics of verse, from the intellectual cottonwooling of emotion. Huge, lean, gaunt Fitz, with his bright dark eyes and tousled hair, striding down Pitt Street. I can see him now a theodolite tossed carelessly over one shoulder, roaring suddenly at sight of a friend, and swinging around, theodolite and all, so that had he been of ordinary height, he'd have brained at least a dozen passers-by; Fitz bellowing in the Angel or some other pub, or trying to fold his long legs under a restaurant table.

R. D., along with Kenneth Slessor, introduced some important modernist themes into Australian poetry of the 1920s and 1930s, helping to give it a new vibrancy. I particularly like the dualism he perceives in humanity, torn between everyday reality, the mundane facts of existence, and transcendent truths, something he referred to as the Greater Apollo.

His early poetry, including the Greater Apollo series, was published in literary magazines and anthologies, though it wasn’t until the 1950s that it was gathered in a more complete book form, a collection called This Nights Orbit. Amongst other things the latter includes Fifth Day, a partial reflection on the trail of Warren Hastings.

It’s a pleasure to be linked to such a man, however distant the link, such a comfort to know that if my family vanish from the face of the earth we will leave a trace of our name in a county in New South Wales, no better place, I feel sure. :-)
Posted by Anastasia F-B at 15:52