Going down the long slide 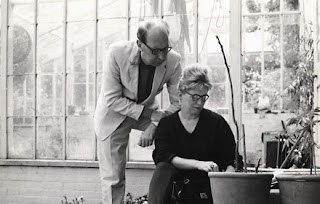 The Daily Telegraph in England has been serialising the letters of the poet Philip Larkin to Monica Jones, his muse, confidante, sounding-board and occasional lover, often the more deceived! It’s a fascinating insight into the creative process of this quintessentially English poet, the voice of the time, at once pessimistic and perceptive, always with a wonderful undercurrent of delightful irony.

His is the voice of an England in transition, unsure of itself, unsure exactly where it belongs. Yes, there is cynicism, sometimes even the echo of a grumpy old man of letters, but there is also much wry amusement, mischievous observations on the times and the transitions. Take Annus Mirabilis by way of example, a poem that always makes me smile;

Up to then there'd only been
A sort of bargaining,
A wrangle for the ring,
A shame that started at sixteen
And spread to everything.

Then all at once the quarrel sank:
Everyone felt the same,
And every life became
A brilliant breaking of the bank,
A quite unlosable game.

So life was never better than
In nineteen sixty-three
(Though just too late for me) -
Between the end of the Chatterley ban
And the Beatles' first LP.

He manages to be simple, funny and profound all at the same time, rather like John Betjeman, another poet and observer of English life that I hugely admire. Larkin, though, as a discovery was rather late for me (a poet divine in 2009!) It was the 2009 poetry season screened on BBC 2 that really opened me up to the melancholic beauty of his work, to one poem in particular which simply overwhelmed me, something I’ll come on to in a moment. Prior to this I really only knew him from This be the verse, a poem I memorised in my teens to recite to the other girls at school (I was overheard by the games mistress!), more for its shock value than anything else;

They fuck you up, your mum and dad.
They may not mean to, but they do.
They fill you with the faults they had
And add some extra, just for you.

But they were fucked up in their turn
By fools in old-style hats and coats,
Who half the time were soppy-stern
And half at one another's throats.

Man hands on misery to man.
It deepens like a coastal shelf.
Get out as early as you can,
And don't have any kids yourself.

Some do, of that I have not the least doubt; mine didn’t! Yes, there is pessimism here, and he does have a point, but it’s also jolly good fun. There are so many other poems by this most admirable, most English, of post war bards that I love and admire, poems I have read since watching the BBC series. But the one that was introduced to me then for the first time, the one that has remained in my head and my heart is the evocative High Windows. This is my poem, the poem that speaks to me, of present contentment and possible future regrets, of passing time, one that brings an awareness that youth truly is the stuff that will not endure;

When I see a couple of kids
And guess he's fucking her and she's
Taking pills or wearing a diaphragm,
I know this is paradise

Everyone old has dreamed of all their lives--
Bonds and gestures pushed to one side
Like an outdated combine harvester,
And everyone young going down the long slide

To happiness, endlessly. I wonder if
Anyone looked at me, forty years back,
And thought, That'll be the life;
No God any more, or sweating in the dark

About hell and that, or having to hide
What you think of the priest. He
And his lot will all go down the long slide
Like free bloody birds. And immediately

Rather than words comes the thought of high windows:
The sun-comprehending glass,
And beyond it, the deep blue air, that shows
Nothing, and is nowhere, and is endless.