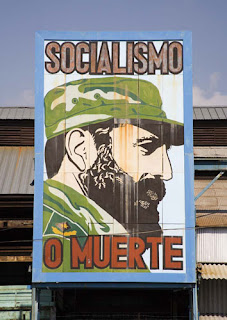 “We pretend to work, they pretend to pay us”, words as I said in my blog on communist-era humour that should really serve as the epitaph for systems driven by the Marxist idea. I have direct experience of this in the visits I’ve made to Cuba, a system where everyone pretends to work. Not any longer: people are going to have to pretend elsewhere because the state is on the point of stopping even pretending to pay!

Last month Fidel was trundled out of his semi-twilight, announcing to the world that the Cuban model no longer works. Dear comrade, it never worked; it never could work, as you would have seen for yourself if you had left your delusional cocoon and wandered around the streets of Havana. But you knew the truth all along, didn’t you? Yes, you did; you just chose to deny it. I watched you in Comandante, the documentary in which you were interviewed by Oliver Stone, the American movie maker. I saw you wittering on about all the prostitutes to be found on the streets in the good old bad old Batista days. But when you were asked if there were any now your eyes dropped as you replied, “Very few.” I laughed, one or two others in the audience laughed at your obvious lie, a lie you knew was a lie. Your whole life has been a lie; your revolution was a lie.

Now is the time for some truth. Raul Castro, Little Brother, nominally in control since 2006, is acquiring more assurance by the day. Not so long after Big Brother blinked into the light the government announced that up to a million state employees are to be laid off, half of them by 1 April 2011. To take up the slack the economy is being liberalised, with self-employment being legalised in a whole number of areas that were previously state monopolies.

But will it work? The precedents are not good. People must remember previous episodes: the late 1960s, when small businesses were effectively stolen by the state and their workers press-ganged, and again when the free enterprise experiment of the 1990s was later hammered to death by punitive levels of taxation, as the economic dinosaur was floated anew on waves of Venezuelan oil.

Still Raul seems determined, announcing to the National Assembly that “We have to erase forever the notion that Cuba is the only country in the world where it is not necessary to work.” I can see that there are pressing necessities here in a country that now imports as much as eighty per cent of its food, another great achievement of socialism that has all but killed the domestic farming industry.

The truth, as those who have been to Cuba will understand, is that people always worked, oh not for a government, by whom they were nominally employed, but for themselves on some hustle or other. I would not go so far as to say that without the black market there would be no market in Cuba but the reality comes close. This is a place where hard currency opens doors, a place where a threadbare ideal is draped over the maggots of corruption. Socialism or Death, the slogan goes. There is no contrast here: socialism is death
Posted by Anastasia F-B at 15:32