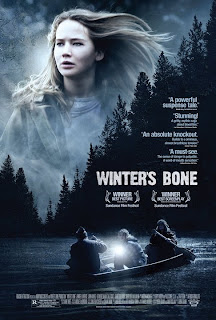 I saw Inception earlier this year, the summer blockbuster staring Leonardo di Caprio. It was typical mass-market fodder, full of expensive wow me special effects with a storyline that defied even the most determined attempts at the suspension of disbelief. At the end of my review (Dream on) I wrote that I was thinking of giving up altogether on Anglo-Saxon film makers, giving up on movies that are full of sound and fury signifying nothing.

Not anymore; for I recently saw Winter’s Bone, a movie that may not have much in the way of sound and fury but if signifies something, it most certainly does, an intelligent story wonderfully told with a singularly impressive lead performance. Directed by Debra Granik and based on a 2006 novel of the same name by Daniel Woodrell, Winter’s Bone is one of the gems that emerge occasionally from the American independent sector.

It won the Grand Jury Prize at this year’s Sundance Festival, premièring in this country in June at the Edinburgh International Film Festival. It’s now tipped for further success at next year’s Oscars. One can never be sure with this kind of gossip, but if true it will be well deserved, if only for the performance, the astonishing performance, of twenty-year-old Jennifer Lawrence.

Most of us will be familiar with depictions of America through movies like Sex and the City or Wall Street, glib, superficial, instantly forgettable multiplex fodder. Winter’s Bone is another America altogether, a rural America, a poor America, a clannish America…and a dangerous America. It’s set in the Ozark Mountains of Missouri, a land of secrets and lies.

This is a place were few modern attitudes have penetrated; where the brutish men order and the cowed women obey; where outsiders are greeted with blank unwelcoming stares, where the greatest offence is to break the unspoken oath of silence. Everyone is related in some way or other to everyone else, though there is little in the way of kin sympathy. Front yards exist only as dumps for old cars and trucks. Here Poverty is king and Penury queen.

This is the kind of place where people hunt to eat, deer if they can get it, squirrels if they can’t. It’s hillbilly country, the kind of place that probably once lived by manufacturing and selling illegal moonshine. The modern product is altogether more lethal – methamphetamine, a dangerously addictive drug, known from its crumbly off-white appearance as peanut butter crank, or simply as crank.

It’s the world of Ree Dolly, played by Lawrence, a seventeen-year-old girl who lives with her mother and younger brother and sister. Her mother is in a catatonic state of depression, taken there, one suspects, by a lifetime of emptiness and disappointment. The responsibility of taking care of the family falls on Ree, resourceful and proud, a responsibility she carries out with loving devotion, teaching her siblings how to shoot at one moment and how to spell at the next.

There is so much I could say about Lawrence’s performance but that would risk going on interminably. I will say that it’s almost iconic; that she plays a strong woman and a frightened teenager by turns; that she sets out on a personal Odyssey that carries her into the lair of the Cyclops, a journey she insists on taking in the face of warning, threats and violence.

Like the rest of the men in the area Ree’s father is a manufacturer of crank with connections to the local criminal network, a hillbilly mafia. He has been caught and charged, released after posting bail. A court date has been set, but he is missing. The local sheriff shows up at the Dolly’s ramshackle property. Unable to communicate with the mother, he tells Ree, the only responsible adult, that the bail posted is the family home and that if her father does not show at the due date they will have to leave.

Faced with homelessness and determined to keep the family together, Ree sets out in pursuit of her father. Wherever she goes she meets with hostility, both from her immediate relations and her wider ‘kin.’ These people know the truth, know the consequences for the Dollys of the father’s absence, but still refuse to talk. Her uncle, known as Teardrop, an excellent performance by John Hawkes, is sympathetic and violent by turns, fearful of going against the code of the mountains, though in the end he manages to acquire some residual courage.

But Ree will not give up. Her journey, becoming more dangerous and darker by degrees, eventually leads to an encounter with shadowy clan chief, a figure known as Little Arthur, played by Kevin Breznahan. It’s the moment of greatest peril. She has been severely beaten up by the clan harpies. Her life is in immediate danger. Still she loses none of her resolve in her determination to save her family. In the end she does, though there is one final gruelling ordeal to go through, which takes her to a lake, to the truth and to a gruesome token.

Winter’s Bone is directed with considerable skill, a mystery and a thriller, brooding and menacing, a sojourn into a modern heart of darkness, not in some distant savage land but a forgotten part of the world of Starbucks and condominiums. It’s difficult to avoid clichés; time does not stand still in the Ozarks; time is irrelevant. This movie will stay with me for a long time, a progress of a girl through the lands of Giant Despair, armoured only with courage and succeeding in hope.

There are times, rare occasions, when acting is more than acting, where distance is crossed and boundaries dissolved. Jennifer Lawrence has crossed that distance, by word, by deed, by expression, by emotion and by gesture. She is unforgettable.