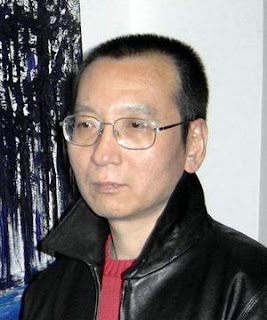 Earlier this month I wrote about Liu Xiabo, winner of the 2010 Nobel Peace Prize (Freedom is an obscenity). I wanted to offer this brave man a tiny drop of support for his moral courage, his determination to stand for a simple principle of freedom. Beyond the fact that he is a leading Chinese dissident I did not know terribly much about him. However, my friend Yun Yi has been busy adding translations from The Mist of Metaphysics , a major philosophical work, to one of her own blogs (Human without God). With her permission I’m adding a selection of these here, a tribute to a clever, subtle thinker in the best Socratic tradition. That a man like this should languish in prison for daring to pose questions is a tragedy for us all. It's as if Socrates had never quite finished his cup of hemlock


From Human without God by Yun Yi

Liu Xiaobo is the Nobel Peace Prize winner of 2010 who is currently in jail in mainland China. I don't know much about him but just discovered one of his books "Mist of metaphysics" and it appears very thoughtful to me, also a bit pessimistic.
Below are some quotes from the book (my own English translation):

About metaphysics:
"Metaphysics is a compound of ways of our thinking and existence, an entirety of our behavior and motive."

"Whereas everything that man creates is for transcending his own limitation, the limitation of existence itself decides that he could never break the boundary."p6

Space and Time:
"...the importance of time and space lies in the fact that they are the measurement of our life, the reference for the meaning of life - which work as a leverage for our survive will."

The value of thinkers:
"The value of a thinker is not about what problems he solves, but what kind of problems/questions he presents, because a new question means a new start and new development. Even if he does solve problems, the solutions must be open and provocative, must conceive new problems/questions"

About human wisdom, the separation of human and nature:
"If we ask: why under God's supervise Adam and Eve still stole the forbidden fruit, choosing the misery of knowing instead of the happiness of unknown? Was it really because of the temptation of Snake? I think, this temptation of snake was not the true cause of this action, the true cause was our human nature. And the reason that we created such a story to put the responsibility to others (snake) was because we have fear - we fear we have such kind of instinct. Indeed, giving a outside cause to our human tragedy can more or less alleviate the cruelty of this destiny." p14

About Time - the value also the limitation of life:
"The Buddhist concept of reincarnation is an avoidance of time, a murder of the sense of time. This avoidance of time creates a psychological satisfaction, a triumph over death, but the price is all our current life. Being apathetic to time is being apathetic to life. If all our hardship was caused by our previous life, we should not fight, be completely obedient to whatever come to us. Those whoever lack vitality, would also lack the sense about time. The sense of time is the sense of life... " p22
Posted by Anastasia F-B at 15:56